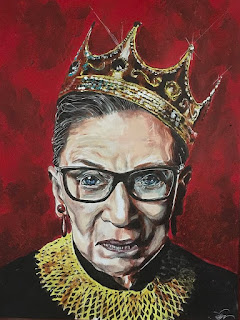 I’ve been pondering why Ruth Bader Ginsburg is a person of immense greatness. Her accomplishments are beyond impressive. Her commitment to justice and equity under the law for many groups of Americans is inspiring. In American history, few persons have had such a profound impact on all of our lives. Amazingly, her work before she became a Supreme Court Justice is just as important as her work on the court.

But here’s what it is. Here’s why she is for me a profoundly inspiring figure: She was in it for the long haul. She knew the work for equality would be slow and difficult. She planned out the strategy. She didn’t let defeats along the way stop her from working for the bigger goals. She was no flash in the pan. She didn’t burn bridges along the way. She made friends with those who opposed her because she knew that she was right in such a deeply important way that what she was working for benefited even her supposed enemies. She brilliantly took cases that benefited men when they faced sex discrimination so that the broader implications of her work were clear, even though they had many other privileges already that some may have thought made their cases less important.  She built her life's work step by step, case by case, so that by the time she got to the next big goal, no one could deny she was right. RBG lived consistently not for the small, quick wins, but for the Really Big Goals.

My God, what a woman, what a leader, what a brilliant mind, what a persistent commitment to the work of equality for all under the law. Her memory is blessed among us.

I don’t know about you, but I’m in this for the long haul. It’s a lifetime of work that never ends. So what. What else are we here for?