I admit it, it’s a little harder to say that this year.

Our lives have been shaken…
It’s not easy to feel all the good news of resurrection
right now in our sheltering lives,
surrounded by so many sick and dead. 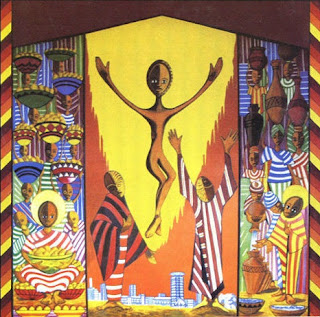 I mean, I guess we could have cancelled Easter…

But let’s just admit first
that all those disciples lives’ had been shaken
when their teacher’s little kingdom of God project failed.
The cross and the tomb shook them to the core
when Jesus ended up dead.
The hope for a new life and new world
where love and justice, mercy and compassion,
ruled above all else… those hopes were crucified
and laid dead in a tomb, too.

The women who went to the tomb…
had their lives shaken,
literally, in fact.
The got to the tomb and there was an earthquake 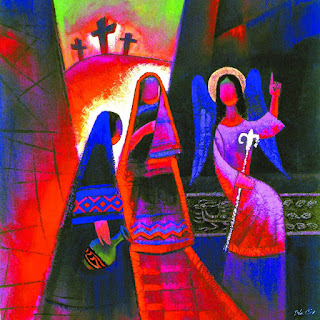 Well, when resurrection is God’s determined act
in a world that uses crosses to get its way,
there is no going back to normal,
there is no old false stability.
God’s earthquake of resurrection
has reshaped our terrain.
How do we handle that?

Do we respond like the guards who with fear and trembling,
fear that their decision to side with Rome
and the powers of death and crucifixion,
might be completely impotent
in the face of a God of resurrection!?
Matthew says the guards shake!
It’s the same word as earthquake!
And it says they, not Jesus, they were like dead men!
One response to God’s resurrection power
is to shake in your boots because you realize
you were on the wrong side of life.

But then the women! They see and listen and respond.
The message comes from a stranger
who rolled away the stone from the tomb
where Jesus had been placed in death
and where Jesus was raised to new life.
Come take a look! God raised him!
You women! Go tell all those men who are still afraid
that God has acted, that this world has been shaken,
and nothing can go back to what it was!
The Jesus project of love and justice, mercy and compassion,
continues on! And now it continues on in you,
in your bodies, in your generous acts of love,
in your courageous acts of resistance,
in your bold faith in the God who holds the very power of life
and bestows it freely and graciously to us all. 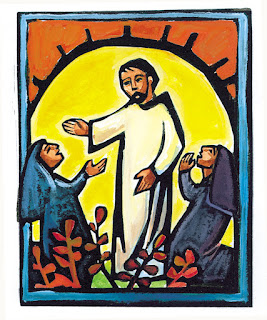 The women go. They felt the resurrection earthquake.
It wasn’t the fearful deadly earthquake
that the guards thought it was.
It was the shake-you-up-so-you-can-believe temblor
of God’s life-giving power in Jesus.
Matthew tells us they were still full of fear,
but now that fear was saturated with joy!
In fact the fear itself was fear rooted in such profound joy
that they were afraid to believe it,
but they did, and they spoke it, and they lived it,
and even the men got their lives shaken up
and nothing would ever be normal again.

This is the radical good news of resurrection:
Jesus is God’s determination
to bring life, justice, and love into this world and into our lives.
And nothing can stop that.
Not oppression. Not rejection.
Not fear. Not crucifixion.
Not death. Not a virus.
Not failed government.
Not even our fearful and doubting selves.
That is good news that shakes up the foundation of our lives.

After the resurrection of Jesus
we can feel like our whole lives have been shaken up,
like nothing can ever be the same,
but not in the deadly way of earthquakes and pandemics,
in the new life way of Jesus,
because God’s power of life is greater than the powers of death.
That’s it! That’s the tweet!
What happened to those first and early followers of Jesus is
they knew their lives could never go back
to the small, fear-based, dead-end approach to life
that had become normal
and thoughtlessly accepted among them.
They knew their lives had been so shaken up
that now they could live large,
they could live above their own fear,
they could love one another and this whole shaken up world
without counting the cost
or without the old boundaries of
who is lovable and who is not,
who is worthy, and who is not,
who has earned it, and who has not.
No, this was an earthquake of the power of life and love
shaking up the whole world. 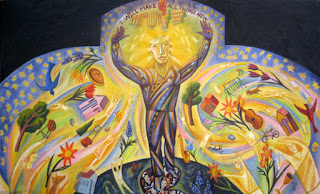 Folks, our lives have been shaken up
by a terrible virus and so many sick and too many dead.
What we’re going through right now
has made the foundation of our lives tremble.
But we have always been living
in houses built on the false foundation
of privilege, and power, and pride.
We have already been living in a world
ruled by death, but most of the time
when we have the ability,
we choose not to pay attention to all the crosses,
or respond and act.

As resurrection, new-life people of faith,
our challenge and promise right now
is to see that we can’t go back to the old normal.
It wasn’t giving life to the world,
and it was only pretending to give life
to a few of us who could make it work.
I’m not saying this pandemic is God’s act or will. Not at all.
But I am saying that God is bringing new life to us
by helping us see it wasn’t that great before.
And we are experiencing through the mysterious
power of the Spirit, right now,
new depths of love, and connection, and life.
Oh the irony! Just when we can’t be connected in person,
we discover how deeply connected we are in spirit!
God is bringing new life in the midst of death,
but that’s what the God of resurrection does.
That is the normal God offers us always, especially now.

In his book Meal from Below (Tacoma, WA: Street Psalms Press, 2012, p. 119), Scott Dewey recounts that before the 2010 earthquake in Haiti
a seminary in Port-au-Prince
would seldom interact with neighboring slums.
In the aftermath of the devastation,
both physical and social barriers were torn down.
A seminary professor showed Dewey his tent
where he was living with other refugees,
and described vital new ministries created in response to need.
“Here in Haiti,” Dewey says,
“in one corner at least, the devastating earthquake
has served to break down social divides
few had been willing to cross.” 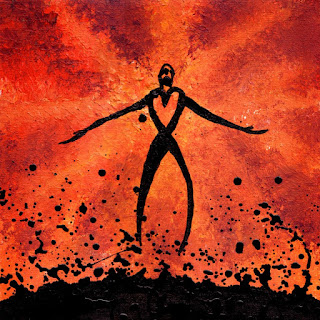 We missed out on Holy Week as our prelude to Easter joy.
And yes, we are going to reschedule those services
and invite you to experience those liturgies, rituals, and music
in community whenever we are able to do that.
But it feels like we missed it this year.
Except we didn’t.
We have been living our holy days and rituals for weeks.
We have been living Holy Thursday,
watching humble servants live out footwashing
in how they care for other people’s sick bodies,
and deliver people’s packages,
and stock grocery shelves to feed us,
and teachers going to great lengths
to help students learn and be fed,
and neighbors checking in on neighbors
and making sure they have what they need,
including toilet paper,
and leaders humbling themselves
and stooping down to make sure
the lowliest among us are taken care of.
We have been living Holy Friday
as so much death, some of it by the virus,
and some of it the result of powers that resist
God’s love and mercy for all.

And we have been living Holy Saturday,
waiting, vigiling, praying,
sitting in candlelight, listening to songs that inspire,
telling stories that fill us with holy imagination,
and living with eager expectation that yes, this too will pass.
just like the day after Jesus was executed,
when even God rested, God sabbathed,
and waited in patient, calm, confident silence
for the day of resurrection to come. 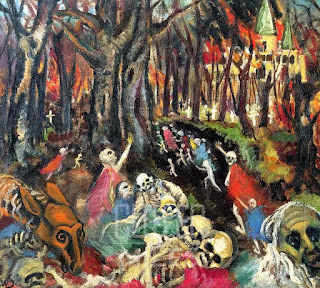 God is acting in this shaking up of our lives
as we live in this terrible coronavirus pandemic.
I don’t think God sent us this virus to teach us something.
I do think that God is moving among us
as we go through this together
and is showing us how much has been lacking in our lives
and how much new life there is for us to have
after this ends.
We can respond to this unsettling of our lives
with the fear of the guards
who thought their job was to keep things just as they were
and protect the interests of the powerful few.
Or, we can respond like the women
with plenty of fear at what was,
but fear saturated with joy at what might be.
Imagine a world where Jesus, the lord of love and life,
got crucified just for living God’s new normal.
Imagine a world where you can’t stop that kind of love and life,
because God is the God of resurrection power.
Imagine it. Trust it. Feel it shaking up everything you thought was normal.
And never, ever go back to the so-called normal,
to the small, fear-based, dead end approach to life
that had become normal
and thoughtlessly accepted among us.
Now in the living Christ we can live large,
live above our own fear,
love one another and this whole shaken up world
without counting the cost
or without the old boundaries of who is lovable
and who is not,
who is worthy, and who is not,
who has earned it, and who has not.
This is the resurrection power of life and love
shaking up the whole world.
Alleluia! Christ is risen!