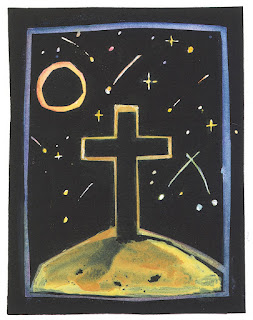 If you praise and worship
a crucified Lord
you no longer have the privilege
of looking away from suffering.
Maybe a lot of the time,
we praise and worship only a resurrected Lord,
and go for the glory,
and reach for the win,
and give homage to power,
but make no mistake about it,
no matter what you call that uncrucified Lord,
it is not Jesus.
Jesus is always, even now,
God’s full and complete immersion
into the suffering of the world.

The Congolese mother seeking asylum
locked in immigration detention in San Diego
and her 7 year old daughter
taken away to a detention center in Chicago
and the daughter screams and cries as they are ripped apart.

The West Virginian unemployed father
who can’t afford to feed his family
and ends up addicted to prescription opioids
after drug companies ship 21 million pills
to a town of 2,900.

The family of Stephon Clark
grieving the young man’s death by police shooting.
“You don’t know what it’s like until you experience it,”
Clark’s uncle, Curtis Gordon, said.
“You can see it on TV, it’s totally OK to deal with those realities
when it’s just through a television
and they’re not in your home. It’s different now.”

And then there is you
and your suffering, your story,
your struggle that you probably don’t want to name out loud
because you either think it is too insignificant
in the face of the world’s suffering,
or you fear no one will care if you do.

The problem in the story of Jesus’s death in Mark
is not the problem of our guilt that causes Jesus’ death,
it is the problem of fear and fleeing at Jesus’ death.
The crowds that praised him on Palm Sunday
did not show up the next Friday to call for his crucifixion.
That’s a different crowd –
that’s the religious leaders and their lobbyists and lackeys
who are aligned with the powerful in Jerusalem and Rome.
The crowd that praised him as Messiah and King
were so disturbed at his arrest and torture
they simply didn’t show up.
They let fear crush hope.

The disciples did not turn on Jesus
and want him crucified.
One of them betrayed him for money,
and to try to stir a revolt.
The rest either denied they knew him,
or ran away and hid.
The sight of Jesus’ suffering was too awful,
and the risk of their suffering was too great.
They simply didn’t show up.
They let fear crush hope.

Some do show up,
all throughout the story of Jesus.
The women for sure,
especially at the crucifixion;
Mary Magdalene, Mary mother of James and Joses,
Salome, and the text says: there were many other women!
Others showed up all the time to see Jesus
because their suffering was too great
and they had no choice but to show up where ever he was.
They couldn’t run and hide from suffering
because it was too real in their lives.
They lost that privilege a long time ago.

Fear and fleeing characterize a lot of our lives.
We fantasize about how we might
witness to our love and faith
when things get tough and we might have to risk something.
And then the moments come and go
and we wonder what happened
and why we had such fear and fled from yet one more cross.
So here we are
gathered before the cross of Jesus
witnessing God’s full immersion into our suffering
that we share with all humanity and all creation.
Sit in it for a while.
Sink into it, or let it sink into you.
Wrestle with your desire to fear and flee.
Jesus did all of this
so that in him
we could become something else,
transformed disciples filled with courageous faith
who by the Spirit’s energy and stirring
no longer flee, though we may have fear.
Instead, we show up.
We show up where ever suffering flares up
because injustice rages like wildfire for so many,
because disease will strike exactly when no one is ready,
because loneliness and rejection fills this broken world to the brim
and many are dying from it.
Show up.
In deep faith in Jesus,
show up to the suffering of the world,
be part of God’s transforming power.
Show up when immigrants are treated like criminals
and give voice to their voiceless cries.
Show up when white working class people
lose their income and their families struggle
and the drug companies push their addictive profits.
Seek healing and treatment and jobs for everyone.
Show up when black lives are diminished
and black families cry out, “Why?”
and ask why with them.
Show up when your own pain says I need help
and you think you aren’t worth it
or you’re too ashamed to ask for it
and see the cross of Jesus in your own life, too.

Who are we who gather around a crucified Lord
to praise and worship and adore him?
By God’s grace and the Spirit’s gyrations
we are the people who show up,
even though we feel like fleeing,
we show up
where ever suffering requires compassion and care,
love and mercy,
change and justice.

We who gather before the cross
are changed by it again.
We lose the privilege of looking away from suffering,
and we even see the deep joy in doing so.
We are the people who show up.
We know intimately that God shows up
where ever beloved people suffer.
And God shows up best
in this body that is willing to be the body of Christ,
Jesus who gave his body for the suffering world.