The Right to Unbear Arms 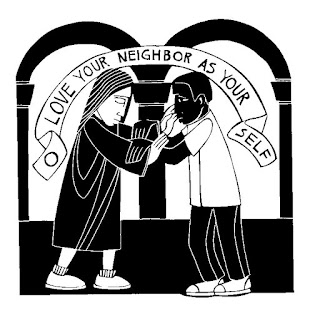 You know, like I do, all the arguments about gun control from both sides. Few people seem to change their minds. If there isn't downright shouting and accusations of terrible motives, there is at least in this seemingly endless debate in our country an unwillingness to pursue change together. Sandy Hook did not change anything. Will any mass shooting change anything?

I'm not going to go into the debate about our gun laws, at least not here. I have my opinions, and I won't hide the fact that I think at a minimum AR-15's and AK-47's should not be generally available to the public without some extreme vetting and special licensing, if at all.

You may be a Christian person who has exercised your right to bear arms in our country. You may value the Second Amendment as essential to our freedoms, and see it as integral to the other delineated rights in the Bill of Rights. I may value freedom of speech and religion to the same degree. I think all of these rights have limitations when they infringe on other people's rights, but we value them in this nation even as we constantly sort out through the courts exactly what they mean for today.

What I'd like to think through on the issue of exercising the right to bear arms when it comes to weapons of mass killing (assault rifles, military-style weapons, semi-automatic guns, whatever you want to call it, I'm not looking to argue definitions right now) is that we have another right: the right to unbear arms. I'd like to urge people of faith in Christ to consider why they might want to exercise this right in this important moment.

Yes, you have the right to bear arms in the United States, with little limitation on what those arms are (we still have an automatic weapons ban, and I do wonder why the NRA does not try to overturn this ban, given their extreme view on unfettered access to guns). But you have another right to exercise, just as much a part of your freedom: the right to unbear arms.

Consider Paul's arguments in his letter to the church in Galatia. Paul is extremely upset with the church there for reverting to a form of Christianity that lays legalistic burdens on others, thereby taking away their freedom in Christ. That freedom, which flows from knowing God's grace in Christ as a radically generous gift, is essential to Paul's teaching and his understanding of the true power of the Gospel. That freedom transforms us and unites us together, because we are all beloved in Christ as a gift made sure in Jesus' life, death, and resurrection.

Here's a great summary of what Paul means, from Galatians chapter 5:


For freedom Christ has set us free. Stand firm, therefore, and do not submit again to a yoke of slavery.  Listen! I, Paul, am telling you that if you let yourselves be circumcised, Christ will be of no benefit to you.  Once again I testify to every man who lets himself be circumcised that he is obliged to obey the entire law.  You who want to be justified by the law have cut yourselves off from Christ; you have fallen away from grace.  For through the Spirit, by faith, we eagerly wait for the hope of righteousness.  For in Christ Jesus neither circumcision nor uncircumcision counts for anything; the only thing that counts is faith working through love.  You were running well; who prevented you from obeying the truth?  Such persuasion does not come from the one who calls you.  A little yeast leavens the whole batch of dough.  I am confident about you in the Lord that you will not think otherwise. But whoever it is that is confusing you will pay the penalty.  But my friends, why am I still being persecuted if I am still preaching circumcision? In that case the offense of the cross has been removed.  I wish those who unsettle you would castrate themselves! (Galatians 5:1-12)

Clearly, Paul is, well, pissed off at anyone who would take away Christian freedom in their teaching of the Gospel. In arguing against forcing non-Jews to practice circumcision in order to be Christian, Paul uses some pretty provocative language. He goes so far at the end to say if you're still preaching circumcision (cutting off foreskin) you should just go cut off the rest of your male genitals! Yeah, he's mad.

We value our freedom in the Gospel. It isn't the same as having freedom in the Constitution of the United States of America, but we might value that freedom in a similar way. So Paul's argument against limiting Christian freedom could be a signficant support for not infringing on constitutional rights, like speech, press, or bearing arms.

So it might come as a shock to read what Paul says next:


For you were called to freedom, brothers and sisters; only do not use your freedom as an opportunity for self-indulgence, but through love become slaves to one another.  For the whole law is summed up in a single commandment, "You shall love your neighbor as yourself." (Galatians 5:13-14)

Right after arguing against limiting Christian's freedom, Paul says you can't use your freedom for yourself. Use your freedom to become a slave! Become a servant to one another, using your freedom not to indulge yourself, but to love your neighbor. Paul says freedom is not for the self, but for the neighbor, and living out the freedom to love is the fulfillment of God's intentions for us.

In the spirit of the freedom we have in Christ, which is far more signficant than any freedoms we have in the Constitution, Christians can exercise their right to unbear arms of mass killing, for the sake of their neighbor, as an act of love, as a way to honor Jesus. Your neighbor is all the high school students in Parkland, Florida, whose lives have been shattered and who are quickly becoming a moral force crying out for us to freely change things for their safety. Your neighbor is every student in every school who goes to school afraid of being slaughtered, who seeks relief from fear and protection from mass killing.

Christian brothers and sisters, this is my plea, my encouragement, my charge, my prayer, my hope: that more and more of you will freely unbear your arms of mass killing, do so joyfully and publicly, and do so as an act of love for your neighbor, for your children, for the next vicitm of mass killing who might be spared by a Christian movement to unbear arms.

This man has set an example to follow. I am grateful for his witness and his challenge. Imagine what would happen if the church gave withness to such freedom today.