Hey Liberal, Progressive, Conservative, Traditional Christians: It Starts with You. 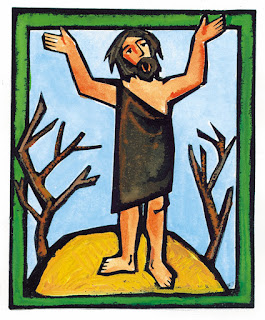 It is tempting during a time of divisiveness to blame others for the problems we face. It is even more tempting with the rise of a demagogic president who has played on the fears and darker desires of the people to blame others for what is going wrong. I admit it. I have spent a lot of time and energy thinking: What is wrong with those people? And I have been more than willing to provide my own answers.

But then during the Advent season, which has perhaps never been better timed for the cultural and political moment, at least not in my lifetime, we hear about John the Baptist. I admit right up front, John is one of my biblical fascinations. He is a wild man archetype. He is a mentor to Jesus. He is a much-needed ice pick of a voice breaking through the frozen souls of the liberals and the conservatives of his day. John is introduced in Matthew like this:

In those days John the Baptist appeared in the wilderness of Judea, proclaiming, “Repent, for the kingdom of heaven has come near.” This is the one of whom the prophet Isaiah spoke when he said,
“The voice of one crying out in the wilderness:
‘Prepare the way of the Lord,
make his paths straight.’ ”
Now John wore clothing of camel’s hair with a leather belt around his waist, and his food was locusts and wild honey. Then the people of Jerusalem and all Judea were going out to him, and all the region along the Jordan, 6and they were baptized by him in the river Jordan, confessing their sins. (Matthew 3:1 – 6)

He is rough and uninhibited. He is attractive and fearsome in the way a lion is, untamed and roaring in beauty. He speaks to the heart because he goes straight to it without playing around with social, religious, or political conventions. He calls people to a new life, a life of getting ready for God’s new and wonderful thing, a life that begins only through the portal of repentance.

But you could be tempted to think, when you hear John’s wilderness scowl, he is speaking to someone else. Probably the people you disagree with. Or perhaps people you agree with but who are just not quite getting with the program. So listen to John speak to the very folks who think that way:

But when he saw many Pharisees and Sadducees coming for baptism, he said to them, “You brood of vipers! Who warned you to flee from the wrath to come? Bear fruit worthy of repentance. Do not presume to say to yourselves, ‘We have Abraham as our ancestor’; for I tell you, God is able from these stones to raise up children to Abraham. Even now the ax is lying at the root of the trees; every tree therefore that does not bear good fruit is cut down and thrown into the fire. (Matthew 3:7 – 10)

The Pharisees and the Sadducees were the liberal and conservative parties of their day, at least within Jewish life. They disagreed with each other. They blamed each other for whatever was going wrong. They argued over whose side God was on. They probably came out to see the fascinating John assuming that the other ones were going to repent, be baptized, change their ways, and become like them. They wanted to see that and feel a little better about themselves.

And then people humbled themselves, opened up about their own failings more than their opponents', went down deep into the water, and came out with a new start. They were ready to embrace the new, open reality of God’s kingdom breaking in because they had given up on the old, closed reality of their own small minds and self-righteousness.

One of the great gifts of the church is the ritual and discipline of confession of sins, repentance, pronouncement of forgiveness, and the chance to walk the path of life anew. It is a source of great hope that there are communities of faith willing to confess their own errors more than they accuse others of theirs. It might be the only thing that makes it possible for God to work newness among us and in the world.

What to do now as the church responds to a difficult time with the potential for a rise in hatred, racism, nationalism, fear, and blaming others? Let the wildness and cry of John reach us. Confess. Repent. Trust forgiveness. Walk anew the path of love in a time of hate.

Prepare the way. It starts with you, with us, here and now beloved, or it might not start anywhere with anyone.