A People Living by Hope: One Candle Will Have to Be Enough 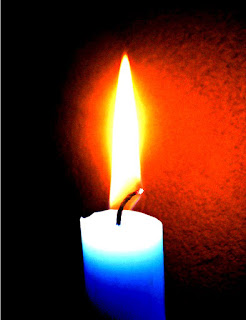 It is tempting to live by despair. The political shifts toward anger, racism, xenophobia, and nationalism have created a mood of anguish for many. Just at the moment when winter is approaching and the days are getting longer and darker, it feels like our society is growing darker, too. People who live by faith in the coming kingdom of God inaugurated in Jesus, people who seek a world of justice, reconciliation, unity in diversity, can feel at times as if we have taken several giant leaps backwards. It is tempting to live by despair.

In Scripture we hear the prophet Isaiah speak of a time to come. We can surmise that he was speaking to a people living in despair. War, economic injustice, fear, and doubt were all too familiar to them. And into that moment and those lives, Isaiah speaks of a day to come when God will be the one who arbitrates disputes between nations and between peoples. Because God is just and righteous, arguments will be settled fairly. Therefore, there will be no need for war or instruments of war. They will be pointless and a waste of metal and wood. They will be repurposed into farming implements to feed people and give life. Of this time to come, Isaiah says:

For out of Zion shall go forth instruction,
and the word of the Lord from Jerusalem.
He shall judge between the nations,
and shall arbitrate for many peoples;
they shall beat their swords into plowshares,
and their spears into pruning hooks;
nation shall not lift up sword against nation,
neither shall they learn war any more. (Isaiah 2:3b – 4)

We are living in a time of great arguments about the way we should go. The disputatious political parties seem unable to judge between their differences themselves. Common citizens struggle to articulate and discuss the deep longing and sadness they feel at the state of the world, and quickly devolve into argument, name calling, and divisiveness. If ever there was a time we needed an arbitrator, and a holy and divine one at that, it is now. Our weapons are still sharp and deemed useful. Weapons of words, political power, hatred, segregation into like-mindedness, and nationalism.

On the first Sunday of Advent, many churches and individuals perform a ritual. On a wreath that includes four candles, only one candle is lit. It sits there, giving some light, but next to three unlit candles. It’s a ritual that is visual and demonstrative of this hard truth: That day we dream of, that kingdom we long for, that world of peace and justice is not here yet. It is a promised day, but one we still only hold a promissory note for, a rain check. On this day, as far as we can tell, we must live by hope, hope rooted in a deep trust in God’s promises, hope that must learn the painful discipline of patience in the face of struggle.

The patience and hope of people of faith is not a passive and do-nothing thing. Our faith dares us to believe that we are part of God’s movement in the world, a cell in the body of Christ straining and lurching towards that great day we await, at times by inches, and at times by miles. But today, during real trials and suffering and antagonism towards God’s reign of peace, one candle is all we get.

In the great Gospel song by Andraé Crouch, Soon and Very Soon, we sing of the day when we are going to see the king, the one who settles our disputes both national and personal so our weapons can be repurposed to grow food and give life. It is by great, audacious faith that we sing of that day coming soon, and very soon, and even sing Hallelujah! We know it may be far off, but it is at least one day closer and sooner. We live by a great, hopeful faith that nothing, not even the dark days, can crush.

We live now with just one candle lit, and three reminding us of the darkness. But one candle will have to be enough.