Sermon for Proper 18 B: The Gospel and #BlackLivesMatter 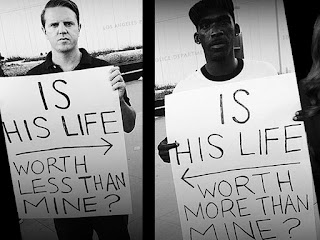 Here’s a question for you:
How do we know that the good news of God is for us?
How do you know that the words of grace and mercy,
that the gift of healing and new life in Christ
are for you in particular?
I’ve talked with plenty of folks in my life and my ministry
and I’ve had plenty of my own low moments
where it seems that the promises of the Gospel message
are for everyone else.
But then you wonder: Is this for me, too?
Am I included?
Does my life matter?

I imagine that’s what the Syrophoenician woman
whose daughter was ill wondered.
She obviously had heard about what Jesus was doing,
how he was going around the whole region
healing and helping, uplifting and empowering others.
But, true to his mission and his purpose,
he was doing this with his own people.
Would he do this for my daughter, she thought?
Would he show the compassion and mercy and healing
of this God he keeps talking about as good news
for me and my daughter, foreigners and outsiders?
Does my life matter, too?

I imagine this is the same pressing, desperate question
that the Syrian refugees are asking
as they flee their war torn homeland
where hundreds of thousands have been killed.
They have flung themselves into the mercy of the world
and into the arms of God however God operates in the world
and they are pleading for safety and shelter.
They are asking: Do our lives matter?
And then a boy’s body washed up on the beach,
and the world cried and grieved.
And after some delay and uncertainty
about how to respond to the crisis,
the world opened the doors of its heart and its borders a little more.
Yes, we are saying together. Yes, your lives matter, too.
And we can’t bear the thought of another child dying
because of your great suffering and need.

Jesus was pretty clear about his mission and purpose
for the moment he was in in his ministry.
He was working under God’s call and authority
to bring healing, repentance and renewal to his own people Israel.
They had suffered enough,
their cries had been heard,
and the time had come for them to have faith renewed,
see God at work bringing hope and good things,
and then through them,
all the world might come to see the good news of God.
That was the plan. Start small,
start locally, start with his own folks,
and then let that move out to all people.
Except, his plan got interrupted by the foreign woman’s great need
as her daughter suffered.
At first, he stuck to his plan.
It wasn’t time yet.
Soon, though, it will be your time, too.
But she would not accept this.
She challenged Jesus.
She called to his deeper compassion.
She showed great faith in him and in God,
and great boldness for the sake of her daughter.
She insisted that her life mattered, too.

And this is why I love this story.
If Jesus had acted like most men of power in his day
or, honestly, in our own day,
he would have shut her down.
He would have put her in her place.
He would not have let her make him look bad.
He would not have let her challenge him and change him.
But instead, Jesus shows us how those with power and position
must act in this world of pain and suffering:
With humility, with openness to changing our plans,
with a positive response to the cries of those who suffer
and their insistence that their lives matter, too.

Henry Nouwen was one of the best known and loved
spiritual writers of the past decades.
His best known book is probably, “The Wounded Healer.”
In it, he writes:
A Christian community is therefore a healing community
not because wounds are cured and pains are alleviated,
but because wounds and pains become openings or occasions
for a new vision.

The church is the community that gathers always
in the presence, and name, and often image of
the crucified and risen Lord Jesus Christ.
It is a community and a movement
always defined by its willingness
to let the wounds and the pains of others
open it up to a new vision
of who and why and how to be in the world.
It is a community that is always ready to say
to those who have been told over and over again
that their lives don’t matter
that in God, in Christ Jesus, their lives do matter.
The church must and can be that community
that is always willing, like Jesus,
to lay aside its best made plans
and respond to the needs of those who are suffering,
because we learn over and over again,
that was the plan all along.

Since the murder of 9 African American Christians
in Emanuel AME church in Charleston,
you have probably heard me talk some
about race and racism and reconciliation
and seeking unity within the church.
I’ve talked about this more in the past few months
than I ever have in my ministry.
It has become clear to me,
that I had grown comfortable with the way things are.
I had assumed that we were all slowly progressing toward
that dream of Martin Luther King
and it was just taking a little longer than we thought.
I had accepted that people just had to be patient with the process
of changing society and it was all working out.
But then I realized in my acceptance of the status quo,
I was saying, in effect: It’s not your time yet.
Your life doesn’t matter quite yet.
That’s why I’m grateful for the movement
that has called itself Black Lives Matter.
It has reminded me that
the message heard over and over again
by many African Americans is just the opposite:
Your lives don’t matter.
And if you or I haven’t experienced what the pain and destruction
of racism does to you,
then we have to listen to the voices crying out now:
Our lives matter. Black lives matter.
There’s no more time to wait for change and healing.
Our sons and daughters need it now.
Of course, in every movement and cause,
there are people who say and do things
that are regrettable and don’t help the cause.
But if you listen to the wise and courageous leaders
within the African American community,
you hear the voice of the Syrophoenician woman:
Our lives matter.

I asked at the beginning of this sermon:
How do we know that the good news of God is for us?
We know it when it is proclaimed not as some general truth,
but as a particular message to you and me,
a particular message that is true now and not some tomorrow,
a particular message that overcomes all our resistance
to believing that we matter, too.
Bishop Elizabeth Eaton, presiding bishop of the ELCA,
has called this moment a Kairos moment.
That’s a Greek biblical word meaning a point in history
where things have reached a turning point,
a moment you can’t ignore, but must respond to.
In this particular moment,
one way the good news of God is proclaimed
is by saying “Black Lives Matter.”
Not because any other lives don’t matter,
but because black lives have been devalued and still are devalued.
For the Syrophoenician woman,
her life and her daughter’s life only mattered
if the response of mercy was now and for them, too.
Syrian refugees cannot wait another moment
for mercy and compassion, if their lives truly matter.