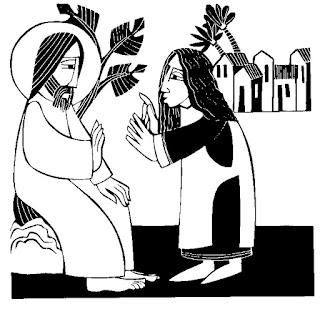 Jesus set out and went away to the region of Tyre. He entered a house and did not want anyone to know he was there. Yet he could not escape notice,but a woman whose little daughter had an unclean spirit immediately heard about him, and she came and bowed down at his feet. Now the woman was a Gentile, of Syrophoenician origin. She begged him to cast the demon out of her daughter. He said to her, “Let the children be fed first, for it is not fair to take the children’s food and throw it to the dogs.” But she answered him, “Sir, even the dogs under the table eat the children’s crumbs.” Then he said to her, “For saying that, you may go—the demon has left your daughter.” So she went home, found the child lying on the bed, and the demon gone. (Mark 7:24-30)


Jesus' encounter with the Syrophoenician woman is one of those stories that causes people to rush to an explanation. Jesus says something that sounds harsh and unsympathetic and very un-Jesus like. Then, after the woman boldly challenges him, he changes his mind. This story would never make it in John's Gospel, where Jesus always knows everything ahead of time and could never change. That's the perfect Jesus many of us live with in our imaginations. But this is Mark's Gospel, and this Jesus is for Mark perfect in a different way.

It should be pretty obvious: Jesus is not Donald Trump. If Donald Trump had been challenged with this woman, he would have insulted her, told her to sit down and go back to where she came from. His easily bruised ego would have lashed out at being questioned on what his plans were. He would have used his power to crush her and get rid of her.

I say this not just to pick on Donald Trump (though I confess to finding that extremely pleasurable) but to make the point: That's not how Jesus responds. Many men of his day and age, not to mention many men today, would respond by silencing and dismissing the woman. Not Jesus. Something else happens.

Yes, Jesus uses language that is rough. He is focused and dedicated to his plans, which it should be said are God's plans for him. He is working to bring his own people into the light of God's mercy so they can be a light to the nations, just as Isaiah of old dreamed. And his perfect, God-given plan is interrupted by the cries of a woman whose daughter is suffering. And Jesus, the powerful man of God, responds to her further challenge of his plans with admiration and gratitude and mercy.

For Mark, Jesus is Son of God not because he is some untouched spirit who knows all and has no human path of growth and learning and humility to follow, but because he is able to use his power for others for the sake of the kingdom. Nothing embodies that better in Mark than Jesus' willingness to be taught by this foreign woman, by his ability to listen with his heart and not just his head, by his letting go of his ego and changing his mind publically even though it might make him look weak, by his willingness to let the cries of the world interrupt his perfect plans.

The body of a Syrian boy washed up on the beach yesterday. Immigrants and refugees cry for safety and compassion. Black lives simply ask that they matter. Someone near you is hurting and needs twenty minutes of your time and compassion. Someone else across town needs your ten dollar donation to the food pantry. The world cries out in suffering and constantly interrupts our perfect plans for how to spend our time and money and energy.

If we're willing to let Jesus teach us, then we stop blaming everyone who is suffering for interfering with our lives. We drop our perfect plans. We let go of controlling everything so that we always come out on top. We respond with hearts of compassion and hands of love. The kingdom of God is not found in the perfection of our plans, but in the perfection of our love and mercy.
Labels: compassion Jesus Lectionary 23 B Mark 7:24-37 mercy power Proper 18 B syrophoenician