Sermon for Proper 10 B (Beheading of John the Baptist) 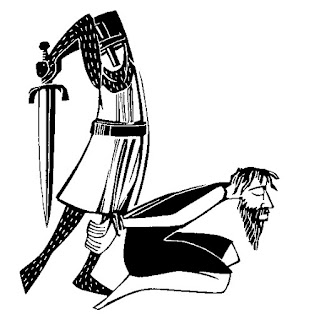 Well, that is some story.
It’s full of fear and terror.
You might have thought you were going to see a Pixar movie,
but you accidentally walked into the Texas Chainsaw Massacre.
You don’t often show up for worship on Sunday
and get a story as shocking and troubling as this Gospel text
about Herod and the beheading of John the Baptist.
Not my fault. It’s the assigned text for the day.
Mark puts a lot of emphasis on this story,
tells it in great detail,
and puts it as a major interruption in Jesus’ ministry.
Why? The same reason you go to see horror movies.
You’ve gotta face your fear and see its power.

I read recently that when a tiger in the wild sees its prey
it roars that awful tiger roar,  and often, instead of running,
the prey will just freeze and stand still.
The tiger, of course, pounces.
Why does this happen?
Some scientists studied the tiger’s roar
and realized that as terrifying as the sound of it is,
something even deeper is going on.
Subsonic waves come out of the tiger
that shake the ground and the prey
and cause such terror that they freeze up.
This is what great fear is for us: it freezes us up
and we don’t even always hear it or know why.

Let’s say you’re going to make a top 10 list
of the things you are most afraid of.
What would you put on it?
Death? Public speaking? Rejection? Poverty?
Cancer? Homelessness? Losing loved ones?
Take those papers and spend some time between now
and the end of the sermon and write some down.
I’m convinced that in many ways,
the genius of Mark’s Gospel is the way the whole story
takes us through all the things we are most afraid of,
and works to change us with good news.

Start with Herod, the poor fool.
Mark makes him look foolish
because he is completely controlled by his fear:
fear of looking bad,
fear of losing whatever sense of himself he has constructed
in his tiny, impish, insecure ego.
even fear of being right about John being a holy man of God.
We can easily forgive a child who is afraid of the dark;
the real tragedy of life is when adults are afraid of the light.
Plato

Because of his fear,
merely because he doesn’t want to look bad in front of his friends,
he keeps a silly exaggerated drunken promise to his daughter
which got manipulated by his embittered wife
and he gruesomely has John beheaded.
As if the cold hard facts weren’t bad enough,
Mark tells us that the girl gave Johns head
on a plate to her mother.
This text is frightening and disturbing.
It is a text of terror.
But here’s what’s so amazing about it:
The one who is most afraid,
the one who is most terrorized is Herod himself.
More than the story of John’s beheading,
it’s the story of Herod losing his head out of fear.
In trying to save himself from what terrifies him
Herod loses himself in terror and violence.

Here’s what Mark is doing in this terrible story:
First, he wants us to see that the ones who are most living by fear
are those who have great power and fear losing it.
So Mark makes them look foolish so we won’t fear them as much.
But of course, we have our own fears, don’t we?
So by seeing how foolish Herod is for letting his fear get the best of him
we can name our own so they don’t get the best of us.
Once we admit and name our fears
they have much less power over us.

The Gospel is at least partly the freedom to name and admit our fears
and hear the good news of God in Christ and his death and resurrection.
The Gospel dismantles the power of fear.
What is worship in the church
but a place to come and enact a holy vision of the world
where our fears are calmed
and the good news of God’s mercy and justice and love
are more true than anything else we can imagine?
Church is not a place to hide or deny our fear
as if having faith meant we shouldn’t have any fear.
Church is a place to gather in the presence of the crucified Jesus
who died under the terrorism of the Roman empire
and say: Yes, we fear these powers.
But we hope and trust even more in the power of God
to bring life from death.
All powers that resist the mercy and justice and love of God
are in the end fueled by fear as foolish as Herod
and will be shown to be powerless by all the crosses they wield.

What is the greatness of the church in the African American tradition?
To be a place where pain and fear are named,
the good news of God’s justice and mercy and love is proclaimed,
and people are empowered to live lives larger than their fear
and greater than the fear of those who hate them?

Some of you may remember our intern Kwame Pitts
who led a presentation on the book,
The Cross and the Lynching Tree.
I’m just now getting around to reading it.
It’s by James Cone, one of the great theologians of our time.
Cone comes out of the African Methodist Episcopal church,
which is pastor Washington’s own tradition.
In his book,
Cone shows how powerfully connected
are the images of the cross of Christ
and the lynching tree of the long, violent, terrorizing period
of explicit and legalized racism in the south.
He says:
The lynching tree was the most horrifying symbol
of white supremacy in black life.
It was a shameful and painful way to die.
The fear of lynching was so deep and widespread
that most blacks were scared even to speak publicly about it.

We lose something in our understanding of Christian faith
if we lose the sense that the cross was for first century Jews and others
the same as the lynching tree of recent American history.
It was every bit as terrorizing as the beheading of John
or any Isis video on the internet today.
And yet, what do we know about those early Christians?
What happened to the symbol of the cross?
Instead of terrorizing them,
it became their source of hope and joy and triumph.
Instead of staying silent,
they proclaimed it in the public square.
Instead of running and hiding,
they reached out to all who were afraid
and told them the good news of living beyond fear
living by faith in the God who raised Jesus to new life
living by trust in the merciful power of God
that is greater than the power of crucifixion.

And what happened among African Americans in the south especially?
Even while living with such terror in the face of the lynching tree,
Billy Holiday sang Strange Fruit.
Black churches preached and empowered people
to live with their full dignity as children of God.
Leaders and ordinary folks rose up
with faith beyond fear to bring change,
even when it meant facing the cross of the lynching tree
in all the forms of violence and persecution
meant to shut them down.
How did they do that, those early Christians
and those 19th and 20th century faithful African Americans?
Because when you know the good news of God in Christ,
the God who hangs with all the crucified and lynched victims,
the God who is compassion for all who suffer,
the God who is justice for all held down by injustice,
the God who brings life out of death,
you live a larger life,
you fear less than the fear of those who hate you
you love with Christ’s love
even in this world of so much fearful living.

Mark’s Gospel knows that the good news has come in Christ,
and wants us to face very fear
that might get in the way of us living by such bold faith
that we can give our lives for love and service
and justice and generosity.
Maybe Mark’s Gospel is like the quote from Eleanor Roosevelt:
Do one thing every day that scares you.

The Gospel message is a summons to you and me
today and now and in our day’s crosses and terrors and struggles
to live by faith even when we have fear
to love even if we struggle with hate
to have peace even in a world of violence
to seek reconciliation even when we or others want retribution.
The reason this way of life is possible
is because God has come to us in infinite love
in Jesus the crucified and risen Lord
and the Spirit is stirring us to live with faith beyond fear.

So here’s what you can do with your fears.
Bring them to the table at communion.
Bring your fears written on paper to the table of Christ’s supper,
where we tell the story of his betrayal,
and rejection, and body broken, and blood poured,
and his glorious resurrection and living presence among us now.
Lay down your fears, and receive the living Christ for your faith.
It’s like the Easter song we sing from the Taize community:
Be not afraid, sing out for joy
Christ is risen, Alelluia!