Therefore we have been buried with him by baptism into death, so that, just as Christ was raised from the dead by the glory of the Father, so we too might walk in newness of life. (Romans 6:4)


The murder and martyrdom of nine innocents at Emanuel AME Church in Charleston was shocking and disturbing. Many of us in the Evangelical Lutheran Church in America (ELCA) were stunned by two facts that came out shortly after:
What does it mean that a young man who was raised in the Christian faith turned to such hatred, racism, and violence? What went wrong in his formation?

I doubt seriously that anything in his formation at his Lutheran church encouraged, suggested, or in any way gave credence to his racist beliefs and violence. I'm sure that his congregation spoke about love of neighbor, the diversity of God's people, and the need for peace in the world.

Was there something in his family life, or group of friends, or hometown that stirred this up in him? Did he suffer some kind of wound in his soul that he let fester into blaming others and fear and murder? I don't know and I don't care to speculate or find blame.

What I do want to do is consider how the work of the church to form young people (or anyone) into mature people of faith is urgent and critical. Whatever the reasons, the spiritual formation of Dylann Roof failed to overcome the forces of racism and hatred and fear and violence around him. Those dark powers did a better job of forming him than the Gospel. What does it take to form a young person, perhaps especially young males, into mature adults who are filled with love for God and love for others? It should be clear to us all at this point that this is serious and hard work.

Where we fail in the Lutheran church and most other Western churches is that we think the work of spiritual formation is fairly easy and is not terribly serious. We don't tend to see it as a critical part of how the Spirit is at work creating a world of neighborly love and sacrificial living. We speak of grace and love and belonging, which are all wonderful, but we minimize the formation at work in all of us through the powerful forces of nationalism, racism, classism, militarism, and economic systems that value people only for their profit potential. 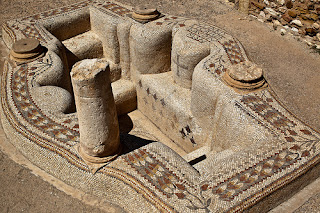 Baptismal preparation for most of our churches is perfunctory and mostly about making the sacrament itself nice and cute. Confirmation for youth who were baptized as infants is mostly about learning the basic information of the tradition, and then again having a nice ceremony where the awkward adolescents look handsome and lovely.

In traditional cultures around the world, boys became men by going through a powerful spiritual transformation called initiation. It was ritual formation that killed the boy so the man could live. It was a deep and powerful immersion into the truth of life and death, and called the boy to live for a bigger vision than himself. It gave him a blessed place within the cosmos and helped him know in his bones he was beloved.

A boy could not be called a man or be given the privileges and powers of a man without going through initiation. Uninitiated males would be a danger to the community and use their power and their weapons for themselves, act out of their fear of death and cause destruction. They would never learn how to let their wounds transform them. They would never learn to weep for the suffering world. Young women went through a process of initiation that was usually different but no less important. 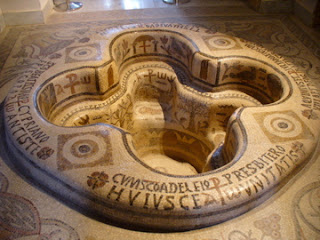 Many ancient baptismal fonts reflect this understanding of the serious and hard work of spiritual formation. They are shaped like tombs with steps leading down into the water, and then coming back out of the water. You weren't being washed from sin, you were drowning, dying to your old self. It is radical, not nice and easy. Some fonts were round like wombs to speak about new birth and new life. Some fonts were built beside streams with flowing water to it was clear your life was now lived in the flow of the Spirit, a mystery you couldn't control but could surely trust and enjoy. Some fonts were eight-sided emphasizing that the resurrection of Christ is the eighth day of creation, a new day, and your life is now lived in the eighth day, too. Some were covered in mosaics depicting key biblical stories of the exodus and the death and resurrection of Christ, so the baptized person knew she was living in the liberating love and power of God and her life was part of a great, enchanted story.

The work of the church in forming baptized people of faith is the work of initiation, the work of death and resurrection, the work of dying to an old self of living by fear, and birthing a new self living by faith in the good news of God in Christ Jesus by the mysterious power of the Spirit. It is serious and hard work, not to be taken lightly or done quickly or without wisdom.

He called the crowd with his disciples, and said to them, "If any want to become my followers, let them deny themselves and take up their cross and follow me. For those who want to save their life will lose it, and those who lose their life for my sake, and for the sake of the gospel, will save it.  (Mark 8:34-35)


It should be clear now more than before Charleston that we cannot take lightly the work of baptismal formation and the ongoing renewal we all need born out of our baptismal identity. The forces at work around us and within us are too powerful and too destructive, and insidiously so.

It is time for the spiritual formation work of the church to move on from nice and easy to hard and strong, from safe and inoffensive to risky and challenging, from information about God to a transforming encounter with the God who calls those who follow Jesus in the way of love to live without fear and discover how much life and love they have to give away.
Labels: baptism charleston initiation Mark 8:34-35 Romans 6:4 spiritual formation