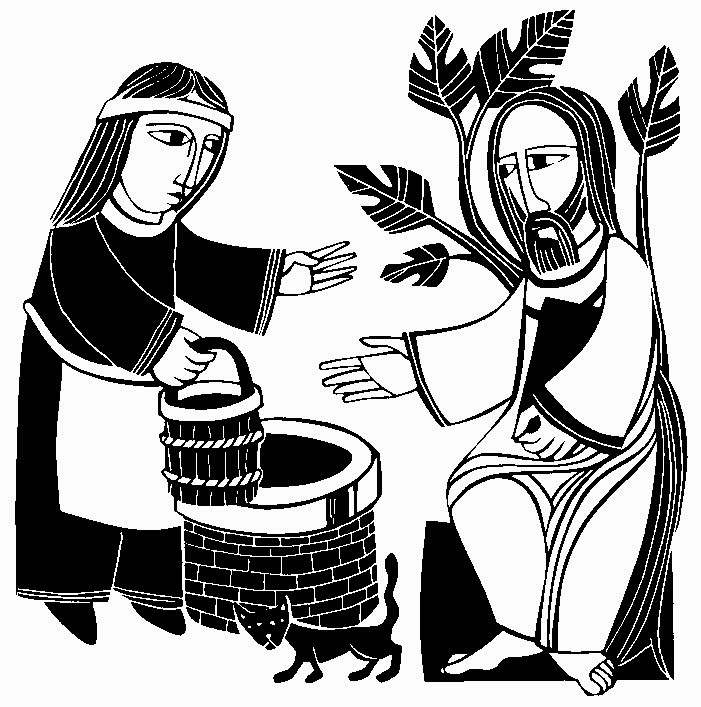 So he came to a Samaritan city called Sychar, near the plot of ground that Jacob had given to his son Joseph. Jacob's well was there, and Jesus, tired out by his journey, was sitting by the well. It was about noon.
A Samaritan woman came to draw water, and Jesus said to her, "Give me a drink." (His disciples had gone to the city to buy food.) The Samaritan woman said to him, "How is it that you, a Jew, ask a drink of me, a woman of Samaria?" (Jews do not share things in common with Samaritans.) Jesus answered her, "If you knew the gift of God, and who it is that is saying to you, 'Give me a drink,' you would have asked him, and he would have given you living water." The woman said to him, "Sir, you have no bucket, and the well is deep. Where do you get that living water? Are you greater than our ancestor Jacob, who gave us the well, and with his sons and his flocks drank from it?" Jesus said to her, "Everyone who drinks of this water will be thirsty again, but those who drink of the water that I will give them will never be thirsty. The water that I will give will become in them a spring of water gushing up to eternal life." The woman said to him, "Sir, give me this water, so that I may never be thirsty or have to keep coming here to draw water."

From Wikipedia:
The word aquavit is derived from Latin aqua vitae, "water of life." The word whisky is derived from uisge beatha, the Goidelic equivalent of this phrase. Likewise, clear fruit brandy is called "eau de vie" (French for "water of life"). Aquavit is an important part of Scandinavian drinking culture, where it is often drunk during festive gatherings, such as Christmas dinners and weddings. After distillation, it is flavoured with herbs, spices, or fruit oil. Commonly seen flavours are caraway, cardamom, cumin, anise, fennel, and lemon or orange peel.[5] Dill and "grains of paradise" are also used.

If it’s true as you say, O abstruse teacher
That you are the pale straw aquavit that we pour
At Christmas and Easter and all the great feasts

Then how crazy was she at the well to dip and draw
When you stood there like a ribbon wrapped bottle
All gift and wonder, no tax or debit required

How crazy are we like grumpy teetotalers
Not to pour a glass and sip with you when
We keep dropping our buckets in empty wells
Labels: grace Jesus John John 4:5-42 Lent 3 A living water love well