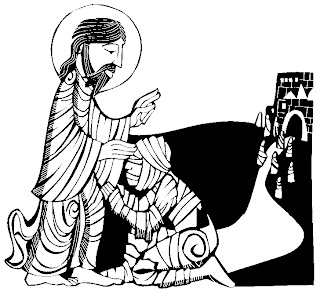 On the way to Jerusalem Jesus was going through the region between Samaria and Galilee. As he entered a village, ten lepers approached him. Keeping their distance, they called out, saying, "Jesus, Master, have mercy on us!" When he saw them, he said to them, "Go and show yourselves to the priests." And as they went, they were made clean. Then one of them, when he saw that he was healed, turned back, praising God with a loud voice. He prostrated himself at Jesus' feet and thanked him. And he was a Samaritan. Then Jesus asked, "Were not ten made clean? But the other nine, where are they? Was none of them found to return and give praise to God except this foreigner?" Then he said to him, "Get up and go on your way; your faith has made you well."
- Luke 17:11-19

His hair the color of gasoline


his smile as wide as a wild coyote


unpredictable as an August tornado


he comes to play his saving tricks on us


He sends ten lepers to the priest for healing


wondering if any will make a u-turn when wonder strikes


doing exactly what he says is missing the point


but the trip wire for exposure of myopic seriousness


He frustrates the easy day with interruptions like cats


and watches our pressure gauges glide past red


he slips a nail under the new car tire


and waits for profanity to roll


Everyone knows there is a trickster among us


No one seems to remember that his cunning


and traps us with his playful, winsome befriending