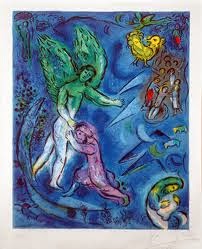 The same night he got up and took his two wives, his two maids, and his eleven children, and crossed the ford of the Jabbok. He took them and sent them across the stream, and likewise everything that he had. Jacob was left alone; and a man wrestled with him until daybreak. When the man saw that he did not prevail against Jacob, he struck him on the hip socket; and Jacob's hip was put out of joint as he wrestled with him. Then he said, "Let me go, for the day is breaking." But Jacob said, "I will not let you go, unless you bless me." So he said to him, "What is your name?" And he said, "Jacob." Then the man said, "You shall no longer be called Jacob, but Israel, for you have striven with God and with humans, and have prevailed." Then Jacob asked him, "Please tell me your name." But he said, "Why is it that you ask my name?" And there he blessed him. So Jacob called the place Peniel, saying, "For I have seen God face to face, and yet my life is preserved." The sun rose upon him as he passed Penuel, limping because of his hip.
- Genesis 32:22-31

I limp with a hip socket struck by marvelous pain
I limp with an ego wounded and the wound a blessing
I limp a survivor from a close encounter with the other
I limp slower and wiser, purple hearted from the battle