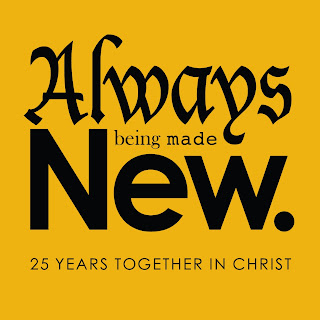 If you could sum up the good news of God in Jesus Christ
in one word, what word would you use?
Love? Forgiveness? Peace?
We’re Lutherans, right, so we’re supposed to say,
justification by grace through faith,
but that’s 5 words,
so we’re automatically eliminated from the game.
If you read Paul’s letters,
he only uses the word a few times,
but it comes at extremely important points in his letters
and seems to sum up all of what he wants to say
about God and Jesus and us:
reconciliation.

So if anyone is in Christ, there is a new creation:
everything old has passed away;
see, everything has become new!
All this is from God, who reconciled us to himself through Christ,
and has given us the ministry of reconciliation;
that is, in Christ God was reconciling the world to himself,
not counting their trespasses against them,
and entrusting the message of reconciliation to us.
So we are ambassadors for Christ,
since God is making his appeal through us;
we entreat you on behalf of Christ, be reconciled to God.

In other famous parts of Paul’s letters
we hear him say how the human divisions between peoples,
race, gender, class, nationality,
no longer divide because those who are in Christ
are one people, one body, reconciled to each other and God.

I looked up the word, reconciliation.
The best definition I found was
the restoration of friendly relations.
That’s pretty good, and a pretty good way
to talk about the good news of God in Christ.
God is friend to us. We’re friendly with God.  Everything is OK.
And because of that, we’re friendly with one another,
even if we come from disparate backgrounds
and don’t speak the same language.
It’s what Jesus was saying to his disciples in John’s Gospel:
We’re friends now.  We’re reconciled to each other and God.
And nothing is greater than being called friends.
Love one another like the friendship I have for you.
And that is how you will experience the love of God:
in the love of human friendship.

Our church body, the ELCA, was formed 25 years ago.
Who remembers what you were doing 25 years ago,
a year before the Berlin wall fell?
I looked up 1988 on Wikipedia.
The first event listed is the beginning of Perestoika,
the economic restructuring of the Soviet Union.
The second event they list?  The formation of the ELCA.
Well, I guess that’s because they start with January 1st.
The winter Olympics were in Calgary.
Indictments were given for the Iran/Contra scandal.
The Last Emperor swept the Academy Awards.
The Soviets began withdrawing from Afghanistan.
Microsoft released Windows 2.1.
The great Yellowstone National Park fire burned 36% of the park land.
The Savings and Loan scandal was at its height.
Lloyd Bentson said to Dan Quayle: You’re no Jack Kennedy.
George H. W. Bush beat Michael Dukakis in the presidential election.
The Iran/Iraq war ended with an estimated 1 million lives lost.
The summer Olympics were in Seoul, South Korea.
Pan Am flight 103 was blown up over Scotland by Lybia.
Vicars Mike Mackey and John Conrad, our 22nd and 23rd interns,
served First English with Pastor Karli.
It was the year before First English became
a Reconciling in Christ congregation,
officially and openly welcoming people
of all sexual orientations.
The green book, the LBW, was only 10 years old.

It was a different world then,
although some of the problems of today
seem strangely connected to some of the problems then.
After years of study and conversation
three Lutheran church bodies officially joined as one new church.
The American Lutheran Church,
The Lutheran Church in America,
and the Association of Evangelical Lutheran Churches
became the Evangelical Lutheran Church in America.
I recall the years leading up to the merger,
and the conversation about what to call the new church.
I’m not sure we picked the best name,
since the word evangelical is often confusing
and we usually end up having to say
we’re not that kind of evangelical.

What I want to give thanks for today
as we celebrate the ELCA’s 25 years
is that the theme of reconciliation has carried on
as a major theme in the ELCA.
We are a church body that has gone out of its way
to break open barriers that separate people
and reconcile what has been divided.
We have led the formation of full communion agreements
with other church bodies, the Episcopal church,
the Presbyterians, Methodists, UCC, Reformed, Moravians.
We helped lead an agreement with the Roman Catholic church
that Lutherans and Catholics now understand
justification by grace through faith in a mutual way!
We are working to reconcile the church as one.

We have worked to move the Lutheran church beyond
the Garrison Keillor stereotypes of Scandanavians
and Germans and jello and lutefisk and niceness as the highest virtue.
We may still have a large majority of English speaking white folks,
but we are working to be a church for all peoples.
Our new worship book is a witness to the beautiful diversity
that we are and want to be.
We are working to reconcile humanity as one.

We have given of ourselves in countless ministries
where tragedy and disaster strike,
and the poor and hungry of the world cry out.
We are working to reconcile the comfortable and the suffering,
the wealthy and the poor.

We have come a long way in being a church
where peoples of all sexual orientations are welcome,
and where women and men serve and lead together.
We just elected our first female presiding bishop.
We are working to reconcile all people in Christ.

If you look at the history of the ELCA
and many of our individual congregations,
you’ll see that membership numbers have declined,
the number of congregations has declined.
There are many factors at work in the life of denominations
that come from historical expressions of the church,
leading to a decline in numbers.
If you look at our society today
you’ll see a significant decline over the past 25 years
in the number of people claiming any religious affiliation
and a sad but understandable increase in the number of people
who mistrust religious institutions.

I’m telling you this because I want us to admit
that the past 25 years are not an easy story of growth and success.
I’m telling you this because being a church dedicated to the gospel
of reconciling all things together in Christ
is so great a mission and ministry
that we should not let the hard part get in the way.
To be a part of God’s reconciling work,
to be as Paul says, ambassadors of reconciliation,
is about as great a purpose and calling I can think of.
Our world is being torn apart
by people who want to separate and divide
based on fear and ignorance and selfishness and anger.
We didn’t realize in 1988, one year after the movie Wall Street came out,
that Gordon Gekko’s claim that greed is good
would be taken so seriously.
But now we are more deeply divided by greed and wealth
and class than we have been in a long time.
I hope you join me in a sense of gratitude
and also a sense of urgency and importance
in being part of a church tradition
that knows the good news of God
is about reconciling us all together
not dividing us by worshiping wealth and blaming the poor.
I hope you feel as I do
that being a part of the ELCA,
imperfect though it is,
is a gift and a calling for 25 years to come
that we can work together beyond FELC and ourselves
to witness to good news.
The work is never done
but the fruits of reconciliation are always flowering.
We are a church body dedicated to the good news
that God’s grace is for all people
that reconciliation between people and God
is a done deal in Christ Jesus
to be celebrated and shared.
We are ambassadors of God’s friendship
doing God’s work with our hands,
speaking words of mutual love,
living in friendship with Jesus and one another
for God’s sake.