Sermon for Resurrection of Our Lord - Easter Sunday 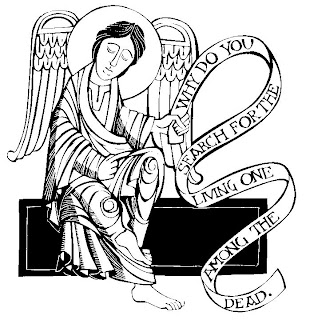 Sermon for the Resurrection of Our Lord
March 31, 2013

I know, I know.
You’re thinking:  come on preacher!
None of this makes any sense!
A dead guy put into a tomb
doesn’t live again, even if it is Jesus!
It’s just not reality.
I know, I know.
But you know what?
Reality’s not all it’s cracked up to be, is it?
I looked up that idiom, by the way.
Something is “cracked up” when it is praised.
Reality is not all it is praised it to be.

You want to hear about reality today?
I think you know it.
Start with Jesus.
The whole story is full of reality:
he is rejected for being honest,
scorned for being humble,
repudiatied for proclaiming the kingdom of God
instead of human empires;
abandoned by his friends because they were small and afraid;
confronted by religious leaders
who always seem to side with the powerful;
tortured at the hands of soliders;
he endured injustice that they called a trial;
he wept and cried at feeling abandoned even by God;
and finally, the one true reality about Jesus,
the one thing that nobody seems to take issue with,
the one thing that nobody has a hard time believing,
the one thing that is the end of his reality:
he was crucified and died.

And what about our own reality today?
What reality did we bring here?
North Korea going off the deep end, and even targeting Austin.
Families are suffering from alcoholism and abuse.
Cancer and HIV and diabetes keep taking too many too soon.
Immigrants and people with accents
are shunned and taken advantage of.
We continue to love less than we know we are created to love.
Depression and anxiety cripple too many lives.
We get sick and die.
Now, don’t get me wrong.
I’m not a sad-sack, Eyeore, glass-half empty, we’re all doomed
kind of guy.
I just think if we’re going to invest our lives
and put all our trust and meaning and purpose
in something called reality,
we ought to be honest about it.
Because you know what?
It’s not all it’s cracked up to be.
Yet, we keep praising it.
We keep investing in it.
We keep limiting our lives because of it.

So, like I said,
reality is not all its cracked up to be.

God isn’t done.
Creation isn’t done.
We aren’t done
Jesus’ life, death, and resurrection
are the future of God’s work for all creation
breaking into our current reality
as the new reality.

I think we can admit together:
Resurrection makes no sense!
It didn’t make sense back then
because it was supposed to be later.
That’s why the disciples don’t get it when it happens.
That’s why they think the women’s story is some gossipy story.
And resurrection doesn’t make sense now.
Our sense of reality and possibility
doesn’t permit it or accept it,
and frankly, it’s an embarrassment to our sensibilities.
But you know what else doesn’t make sense?
Forgiveness
Loving others even when it costs you something of yourself
Living life with joy and humor even though
we know it is short and suffering is part of the deal
Working for justice for all who are rejected, poor, and oppressed
even though you know this world will always be a mess
Having babies when you know you’re the parents
they are going to be in therapy for when they grow up
Peace
Creation
Love
Mystery
Laughter
Resurrection
You could say, if you have resurrection eyes and ears
that all of these things are nonsense
but enter into our troubled world
as signs of the kingdom,
new creations of God,
resurrection life.
I propose that everything in that list
equally depends on belief in God
who creates new possibilities out of our limited ones
new life out of our death and everything we kill
new relationships out of our broken ones
new wine and bread out of
even the little bit we are willing to share.

What made the least sense of all things,
what didn’t fit reality one bit,
was Jesus way:
humility, servanthood,
sharing bread with everyone,
sacrificial love,
trusting God in all things
especially the hard things
and especially the hardest thing which is death,
refusing to match violence with violence,
proclaiming God’s forgiveness freely,
bringing rich and poor together as a new community.
Thankfully and inexplicably,
the old reality ended at the cross.
The new reality,
which is Jesus’ nonsensicle life of love and trust in God’s new reality,
that began for us at the resurrection of Jesus.
This new reality is a beautiful and deep mystery for us.
It has become our new reality in baptism,
when we died to our old reality, our old small, false self,
and we began living the new reality,
we began living the Jesus reality,
because with a living Jesus, we are living Jesus.
Don’t solve the mystery, live the mystery.
Don’t try to fit the new reality into the old,
it just doesn’t make sense.
Live the new reality, live the Jesus reality of love and forgiveness
and bold, faithful living,
and trust in God that goes all the way to the grave.
Live the new reality of breaking bread together with each other
and with strangers
and with Jesus.
Live the new reality of forgiveness,
which, as Lily Tomlin famously said,
Forgiveness means giving up all hope of a better past.
Forgiveness is the end of the old reality,
which we don’t have to fix,
and the entry point into the new, which is a gift given to us.

Reality isn’t all it is cracked up to be.
But the new reality is really cracked up.
The new reality of life with God in Christ is worthy of praise.
The new reality of resurrection now and in the tomorrow that is God’s new and final creation, really does crack us up.
You know the other way we crack up?
When we burst forth in laughter.
You know there is an old tradition at Easter
of telling jokes, cracking up,
because laughter expresses the joy of resurrection,
and laughter in the midst of the old reality
may be our highest form of praising God.
So here we go:
Q. Why do we paint Easter eggs?
A. Because it's easier than trying to wallpaper them!

Q. Why did the Easter egg hide?
A. Because he was a little chicken

Q. How does the Easter Bunny travel?
A. By hare plane!

Q. How do you know carrots are good for your eyes?
A. Have you ever seen a rabbit wearing glasses?

Q. What kind of beans grow in the Easter Bunny’s garden?
A.  Jelly beans!

Q. How does the Easter bunny stay in shape?
A. Lots of eggs-ercise!

Q. What kind of jewelry does Easter Bunny wear?
A.  14 carrot gold

Q. Where does the Easter bunny get his eggs?
A. From an egg plant

Q. How does the Easter Bunny keep his fur neat?
A. With a hare brush!

Q. What do you call an Easter egg from outer space?
A. An "Egg-stra terrestial".