Deep and Terrifying Darkness in which Covenant Comes 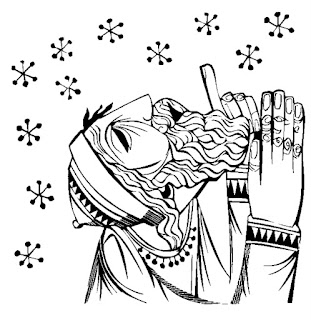 After these things the word of the LORD came to Abram in a vision, "Do not be afraid, Abram, I am your shield; your reward shall be very great." But Abram said, "O Lord GOD, what will you give me, for I continue childless, and the heir of my house is Eliezer of Damascus?" And Abram said, "You have given me no offspring, and so a slave born in my house is to be my heir." But the word of the LORD came to him, "This man shall not be your heir; no one but your very own issue shall be your heir." He brought him outside and said, "Look toward heaven and count the stars, if you are able to count them." Then he said to him, "So shall your descendants be." And he believed the LORD; and the LORD reckoned it to him as righteousness. Then he said to him, "I am the LORD who brought you from Ur of the Chaldeans, to give you this land to possess." But he said, "O Lord GOD, how am I to know that I shall possess it?" He said to him, "Bring me a heifer three years old, a female goat three years old, a ram three years old, a turtledove, and a young pigeon." He brought him all these and cut them in two, laying each half over against the other; but he did not cut the birds in two. And when birds of prey came down on the carcasses, Abram drove them away. As the sun was going down, a deep sleep fell upon Abram, and a deep and terrifying darkness descended upon him. When the sun had gone down and it was dark, a smoking fire pot and a flaming torch passed between these pieces. On that day the LORD made a covenant with Abram, saying, "To your descendants I give this land, from the river of Egypt to the great river, the river Euphrates.

It’s the dream when you envisioned the smoking fire pot
and the flaming torch promenading through
the slain and split heifer, goat, and ram and see
you are still whole and blessed and counted among the stars