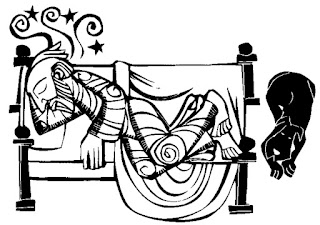 See, I am sending my messenger to prepare the way before me, and the LORD whom you seek will suddenly come to his temple. The messenger of the covenant in whom you delight — indeed, he is coming, says the LORD of hosts.  But who can endure the day of his coming, and who can stand when he appears?
For he is like a refiner's fire and like fullers' soap;  he will sit as a refiner and purifier of silver, and he will purify the descendants of Levi and refine them like gold and silver, until they present offerings to the LORD in righteousness.  Then the offering of Judah and Jerusalem will be pleasing to the LORD as in the days of old and as in former years.   - Malachi 3:1-4

The Messenger
comes in midnight dreams to tell us that the mountain of ore –
five tons of debris from the soul’s strip mine
dug up from psychotherapy and silent desert sitting
exposing veins of pain and subterranean turpitude –
looks like a waste of dirt and igneous rock and tailings
but is all there for the intended divine distillation
the pyre of grace and the crucible of mercy
until sitting in the bottom of the vaporized pile
is the gold of your true self too long emtombed
and now, even in your resistance to purification,
shines like the harvest moon low over the city
slowly rising to the apex of holy night happenings