About that plucking out the eye thing... 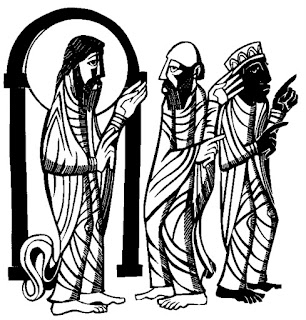 They gathered around Jesus, each face
with a seriousness that puzzled the good Lord
except for the one with the plucked out eye –
it was hard to look puzzled with the patch and all.
He looked at them and said,
holding back an uncharacteristic chuckle:

For God’s sake, stop damaging yourselves.
You know I was kidding, right?
Have you heard of hyperbole, people?
Just don’t do those mean things anymore
and if you do, say you’re sorry, make amends, and move on.
Lift up the lowly and respect the helpless.
It’s just not that hard.
Come on, folks!  Get over yourselves!
You're not that bad, and you're not that good.

And then they ate supper and he taught them
many more things that they misunderstood.