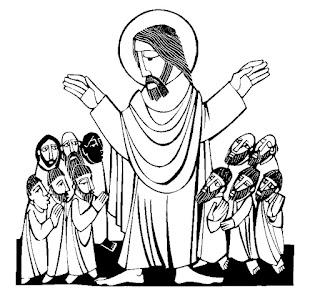 My sermon from 3 years ago, that I thought was worth another look...

You have certainly dealt with it.
You have likely complained about it.
You may have suffered because of it.
I am talking about that great human creation of the way we do things
we call “the system.”
Whatever the area of life,
schools, government, workplace, economy, religion...
there is “the system.”
And we don’t much care for it in whatever realm of life we encounter it.

In John’s Gospel,
this thing we call “the system”
is called by the term: “the world.”
The Gospel uses the term “kosmos”
which gets translated as “world”.
John doesn’t mean the created world of God,
which is good in biblical thought.
He means the human ordering of life,
the social, cultural, political, and economic structures
that shape and determine so much of our lives,
and are bent toward the ways of injustice and death.

We call it “they system.”
Many people experience it these days in their health care.
People get caught up in the system,
lost in the shuffle of tests and doctors
and hospitals and insurance companies.
Somewhere in there,
there is healing and compassion
and human beings doing amazing things.
But the system makes it all a major pain in the neck,
and benefits some people,
and leaves others out on the fringe of health and compassion.
John’s Gospel understands something we might not capture
in our talk of the system.
John’s Gospel understands that the human ordering of things
is often in direct contrast to God’s ordering of things.
The human ordering of things is the insidious cause
of so much suffering and oppression
and cruelty and selfish greed.

Now for some religious people,
there is a hope that God would come and save us
from having to live in all of these systems,
these messed up human institutions and ways of living.
There is a hope that we could be saved out of the world
and live in a blissful, heavenly realm.
Some early Christians were tempted by that belief.
They thought that Jesus came to save them from the world
so they could leave all the problems behind.
Many Christians live with that same hope today.
The temptation is to abandon the world, the system,
the chaotic human realm of life,
either for some piece of land far away from all the strife,
or for some other-worldly existence where only the good,
clean, safe people like us live.

You know the joke about the Lutheran who died and went to heaven?
On his way in walking with St. Peter,
he walked by a room of partiers
drinking martinis and having a blast.
He said, “Who’s that?”
Peter said, “That’s the Episcopalians.”
They kept walking and there was another room,
and there was singing and dancing.
“Who’s that?” the Lutheran guy asked.
“Oh that’s the Methodists.”

They walked a little farther and there was a room
with no noise and the door was closed tight.
“Who’s that?” Mr. Lutheran asked.
“Shhhhh.”  St. Peter said.
“That’s the fundamentalists.
They think they’re the only ones here.”

When you read John’s Gospel,
you could be tempted to think that is the perspective.
There is a part of John that sounds very black and white:
The world is bad.
Those saved in Jesus are good,
and they’re the only ones God cares about.
But John’s Gospel is easily misread
and misused to create all kinds of exclusive or judgmental
Christian communities.

If you read all of John’s Gospel
especially the text we heard today and some others
you start to see the bigger picture of John’s vision:
Yes, the world is messed up.
The human ordering of things is opposed to God’s
life-giving ordering of creation.
Yes, the people of God in Jesus are not about that way of living
but have graciously been restored
to the life-giving ways of God in Jesus,
at least ideally.
But, Jesus has not come to save his people from the world.
Jesus has not come to rapture us out of the system.
Jesus himself, you might say,
lived in and under the system as Rome embodied it.
And Jesus died under that system.
Why?
So that his followers could live and die in the same way!
And then Jesus called his followers,
not to run and hide from it all,
and not to get too swept up in it all,
but to live in the swirling chaos of this world
anchored in the life-giving ways of God.

Jesus said it in a few powerful words from John:
We do not belong to the world,
but we are sent into it for God’s loving purpose.

We do not belong to the world.
Our understanding of life and how to live with one another
is not determined by or given by or judged by
the systems of the world,
the values and assumptions of the human ordering of life.
People order life primarily based on fear,
and self-preservation, and tribal thinking,
and reactionary retribution.
As God’s people, this is not what we are about.
We are about a way of living based on faith,
and preserving the whole, and interest of the neighbor,
and recognition of universal human worth,
and action based on love for others.

We do, of course, get caught up in it all.
A simplistic view of who we are in Christ
would cover-up the truth
that we are complicit in the system,
that we are part of the problem,
that we benefit from ways that harm others,
that we share in the destructive ways of death.

But none of that erases our God-given, baptismal identity in Christ.
We are not about the human ways of ordering life that lead to
injustice and death,
We are about something else,
because God has claimed us for it in the cross of Christ.
We do not belong to the world, we belong to God.
Just as Jesus the beloved son belonged to the Father,
so are we, too, beloved sons and daughters of God.

Our ELCA denominational headquarters in the holy city of Chicago
has recently done some re-branding
for the sake of mission and ministry.
You can see it on the web site elca.org
and on some commercials airing on television right now.
And the tag line of the ads is:   God’s work.  Our hands.
God’s love abides in Jesus,
and Jesus abides in us,
so God’s love abides in the world through us.
God’s work.  Our hands.

This is what makes our Christian faith not only hope-filled,
but also a life-long struggle.
This is the full maturity of Christian faith,
knowing that we are called back into the very realm
we have been saved from,
because God’s saving work is still ongoing,
and the world is still being redeemed.

So, you know all those systems we complain about,
and suffer under,
and lose patience with,
and go crazy dealing with?
They are the realm of God’s saving work.
The institutions and social structures,
the economic engines and political powers,
the religions and hospitals,
the governments and the militaries...
God is at work redeeming these human works,
so they may become life-giving
and generous
and ordered toward loving the neighbor.

As much as we would rather be saved out of the world,
we are saved into it,
because God has chosen us
to be a means of re-ordering the world towards life and love.
And not just us, but many others
whose denomination or worship or creeds
or culture look very different from ours.

I don’t know exactly what all this means.
There must be some practical way we live this,
or all of this is just preacher talk.
It may mean that you and I each have a small impact
on the day to day reality of living under the system,
making the most of a bad thing,
bringing humanity and compassion
into systems become inhumane.
It may mean that the church works in larger ways
to confront, address, and transform systems
that leave too many out of the loop.
It may mean that the one thing we do most and best
actually matters for our world:
We gather together into one community,
rich and poor,
speaking every language,
straight and gay,
old and young,
and we gather in unity,
sharing one bread and cup,
God’s love abiding in Jesus,
Jesus abiding in us,
God’s love sent into the world through us.
We have had enough of Christianity
that is either too much of the world,
and takes on the assumptions of human-ordered living,
or too much removed from the world,
wanting to protect itself and find bliss behind a locked gate.
Not only is it not faithful to the God of Jesus,
it also isn’t very interesting or engaging.

God has called us into a risky engagement with life,
and not naively, but fully aware of the cost.
The cross of Jesus is our calling, our stark reminder,
and our hope that being God’s people in the world
actually serves some purpose,
truly brings about God’s realm of life and love.