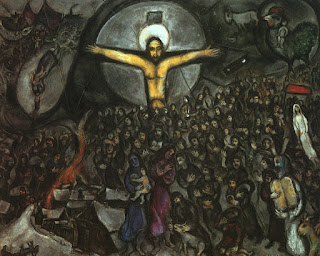 It’s an odd thing to say,
but we do say it:
The cross was necessary.
The cross was somehow necessary for something new to happen.
Except, don’t mistake it:
It wasn’t necessary for God.
God’s mercy and life-giving power don’t depend on some contrived
system of offense and retaliation,
or dishonor and required payment,
or guilt and sin offering,
or anger and appeasement.
God is not bound by human notions
of fairness or requirements or economic transactions or emotion.

In John’s Gospel, we get strange language about Jesus and the cross
like glorification,
Jesus lifted up on the cross for all to see and have eternal life,
the lamb of God,
the truth,
a shining light in the darkness.
John’s unique Gospel tells us
that Jesus was lifted up on the cross
to glorify God in himself,
to show everyone the truth about empires and religions
and all who cower in the darkness,
clinging to themselves at all cost,
afraid of the liberating light of God’s love.
So Jesus, the man of love, life, loyalty, and liberation,
is lifted up so the cross could
expose the Roman empire for what it truly was,
expose religious systems of power and control for what they truly are,
expose human fear and grasping at straws for what they are:
it is all death-dealing instead of life giving.
So in their very game of power and domination
Rome and the political, economic, and religious power brokers
are exposed for what they are: a lie, a failure, a deathly force.
And so are every human system and belief today
that seek the same lies and oppose God.
The necessary cross is the most true thing about them
so they are exposed,
and any part of us that thinks
that is the way to construct and live in the world
is exposed, too, as hard as that is,
and we are changed.
Whenever we gather before the cross,
it is all exposed again so that
we can be changed again.

Tonight, our Jewish brothers and sisters
will celebrate Passover,
the beautiful and sacred ritual that connects Jews
to the central story of Jewish faith: liberation.
Through a meal shared, a story told,
a family gathered at table,
and a worldwide but small community joined in prayer,
the Passover reminds Jews
that they were once a people in bondage,
that they were once under oppression,
that they were once sure that the Egyptian empire
was the way the world was constructed,
and that’s the way it would always be.
But God liberated them from Egypt
to be a people who see the world for what it is:
One series of powerful empires after another.
God liberated them from Pharaoh’s oppression.
And God liberated them from their own belief
in Pharaoh’s destructive power
and their doubt about God’s merciful, creative power.
The Lord God had the Hebrew slaves
slaughter a lamb, brush the blood all around their doors,
and then eat, huddled together
and celebrate the power of God to liberate.
If anyone got scared that Pharaoh might win,
they just looked at the blood on the doorway,
and they remembered that God was their protection.

When Jesus is crucified in John’s Gospel,
he is crucified at the moment that the Passover lambs
are slaughtered to celebrate God’s liberation.
In fact, John’s timetable is completely different
from Matthew, Mark, and Luke, just so he can make this point.
John’s message is clear even if it is coded in symbolism:
Jesus’ death is a new Passover.
Jesus’ death exposes empire and religion
for all their oppressive, deadly forces.
Jesus’ death liberates those who see God in it,
who see the truth about this world of selfishness
and power grabbing
and what it does when we think
it is just the way the world is.
Jesus’ death is necessary for Rome and all empires and religions
who oppose God’s liberating power.
Jesus’ death exposes all of our false beliefs and misplaced trust
instead of trusting and believing in the God
of infinite love, endless mercy, passionate justice,
and uncontrollable grace.

How are we to respond to the cross of Jesus,
the exposing and liberating cross of Jesus,
tonight and always?
I don’t think we should respond with guilt.
Guilt just makes us think
the cross was necessary for God,
and it pushes us away from God,
it doesn’t draw us toward God,
which is the whole point.
And then we end up with all the same
oppressive religious claims that keep us
trapped, not liberated by God.

Imagine you are trapped in a burning building.
There’s no way for you to get out on your own.
And just when you have given up,
a fire fighter bursts through the door, takes you to the window,
gets you on a ladder, and sends you off to safety.
But then, the building is consumed and the fire fighter perishes.
Do you look on at the burning timbers with guilt?
No, you look on with a deep sense of honor.

I think our primary response to the cross of Jesus,
especially on this Holy Friday, is honor.
We are here tonight to honor Jesus
for incarnating the love of God so thoroughly
and so profoundly, and so courageously
and so transformationally
that it necessarily cost him his life.
That’s what happens in this human world of fearful, unliberated,
deathly, power-grabbing sinfulness.

Jesus exposed for us and all the world
the ways we lose sight of God
and grab hold of the fear-based, blaming,
self-preserving, greedy,
self-righteous ways of living.
And in doing so,
he liberates us from all those things and from ourselves.

Liberation is not an easy thing.
It means living and loving freely.
It means trusting God more than anything else.
It means seeing the cross as necessary
and you might have to bear it in ways you never dreamed of.
We honor Jesus tonight
by seeing in his cross the exposure of all the false ways,
by welcoming and living the liberation it brings,
by following him where ever his liberating love leads us,
and by standing in silent awe at what God has done for us.