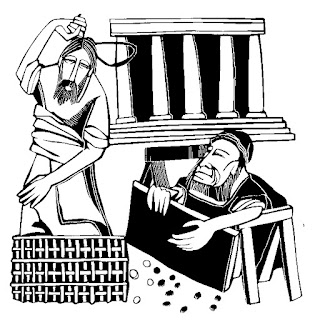 Jesus is angry.  Deal with it.
It’s not the picture of the milquetoast,
pale and frail pushover we’re used to seeing
in pious art and old movies.
Jesus is angry.  And it’s not some singular moment
when he loses his cool and then regains composure and apologizes.
This is something true and central about who he is.
Because Jesus isn’t angry about the inconsequential things
that seem to get us angry on a daily basis:
waiting in line for 3 whole minutes for a grande latte;
having to sit in traffic and someone cuts in front of you;
being forced to lose an hour of sleep every spring.
Jesus is angry at the misuse of power and authority
in political, economic, and religious life.
And in the face of injustice, and abuse, and harm,
anger is often needed to break things open.

A lot of us are scared of anger,
anger in ourselves and in others.
Some of us grew up in troubled households
where anger was the chief response to everything.
Some of us know how quickly anger
slips over into violent rage.
Some of us have anger management issues.
But that’s not Jesus,
and that’s not what anger is always about.

In the story from John’s Gospel,
Jesus is confronting the political, economic, and religious systems
that have controlled access to the life-giving God.
They have turned sacredness and the holy into a commodity.
They have created a market system for access to the divine
and make a profit off of it.
They have put great barriers between ordinary, and mostly poor, folks
and the abundance of life that is knowing and loving
the fatherly and motherly embrace of the divine.
So, yeah, Jesus is angry,
and I’d like you to hear that Jesus’ anger,
more than anything in this story,
is good news for us.

During the past decade,
we have heard hundreds and thousands of victims of abuse
come forward and talk about what religious leaders
have done to them.
The problem has been particularly acute in the Roman Catholic church,
though not unique to them.
But the bigger problem was not simply that abuse happened,
which itself is a gross abuse of religious authority and power,
the bigger problem was that others in the church
who found out about it,did not get angry.
They hushed it up.
They explained it away.
They protected abusers and dismissed the abused.
And what every single child and adult
who was treated this way needed more than anything
was for someone to get angry, angry for them,
angry enough to act for change.

This past week there was a news story
about Rush Limbaugh reacting to a woman
who was speaking out about women’s health issues.
You probably heard the horrible and disparaging things
he said about her.
Thankfully, there was a swift and nearly universal response
to Limbaugh’s attack:
Many people came to the woman’s defense
and expressed their anger and disapproval at what Limbaugh said.
It made all the difference in the world.
Sponsors have stopped sponsoring his form of crass entertainment.
Sometimes you need someone to get angry for you,
angry enough to act for change.

So here’s what going on with Jesus:
He’s angry.  But he’s angry for us.
He’s angry at people in power turning God into an inaccessible,
distant, and greedy idol,
who is always and easily accessible to those with wealth,
and barely and only with great difficulty
accessible to most everyone else.
He’s rightly angry, righteously upset,
because Jesus is all about making God accessible
to the whole world,
in a free and generous way.
Jesus is getting angry at all that separates us
from loving and knowing and wrapping ourselves in the mystery of
the one, holy, living God.
And he lets that passionate love for God and us
guide him until he gives his life for it,
so that finally, and eternally,
all may have access to the uncontrollable,
unsellable, uncageable, unlimited Holy One.
Jesus’ anger is not an anger that spills over into violent rage,
but into courageous action for change,
even the costly change that comes only through his death.

John’s Gospel tells us that Jesus’ own body
is the temple for God,
the location of the holy,
the way access to the source of love and life is freely given
And when Jesus is crucified in one last feeble attempt
to control and limit access to God by those in power,
Jesus is raised up to set his body free
to be the access of God everywhere and in everyone,
access that cannot be controlled or sold,
only given away and celebrated.

There are two metaphors at work for us today:
Jesus’ body is the temple of God.
The church is the body of Christ.
When we put these two things together,
we see that Jesus’ anger paid off in ways far greater
than we could have imagined or wanted.
When we gather as the community of faith
sharing in the presence of Christ through Word and Spirit,
fellowship and love,
bread and wine,
we live in free and gracious access to God.
And when we live as God’s people in the world,
as the church, as the body of Christ,
we are a means for all people to the same
free and gracious access to the source of all life and love.

I don’t know about you,
but it makes me think very deeply and carefully
how we live as the body of Christ called the church.
It makes me wonder and even worry
if we have tried to control and limit and sell
access to God for other people,
and if we have, to confess it and rid ourselves of it.
But more than that,
it makes me wonder if we have been angry enough
at all the ways politics and the economy and religion
have created barriers that keep the poor and the powerless
believing and acting as if
they have the last and the least access to God,
the lowest connection to divine grace and mercy.
the littlest reason to believe
they are welcome in God’s house.

Almost every message in our culture
subtly and sometimes overtly tells people:
If you want to be close to God and know love and life,
you have to look like you live the good life,
or you have to be born into
a privileged class or gender or sexuality,
or you gotta buy your way in,
or you have to earn your way up the ladder of success.
We have commodified almost everything about our lives.
We haven’t turned God’s house into a marketplace
as much as we have turned the marketplace into the temple.
The result is that those with the least means
have the greatest difficulty believing they are part
of something blessed, something loving,
something welcoming,  something good.

Maybe you have known times
when it was you who experienced barriers that others put up
in front of your ability to know God, love God,
be loved by God, and live out God’s gracious purpose for you.
For too long it was women who were told
you don’t have access,
you can’t get close to the holy,
you can’t be an instrument of God’s Spirit working.
Thankfully, yes, someone along the way got angry,
and slowly things began to open up, and still are.

We, as a community of living witness,
loving welcome, and longing embrace,
we provide access to God as the body of Christ.
It isn’t ours to limit or control or charge for,
it is ours to give away freely through witness,
and invitation, and acts of love and mercy,
and yes, even by getting angry when some are left out,
angry enough to act for change.

It is a bold thing to say that Jesus’ body is the temple for God,
and that we as the church are the body of Christ today.
So when you come forward to receive Christ today in bread and wine,
come and gather in this circle of gratitude and love
around this table of companionship with Christ.
Look across the way when you’re standing here.
Find someone’s eyes.  See the mystery of God among us.
Come see God today in the temple
in the temple of Jesus body
in the people who comprise that body
breaking bread together with our companion Jesus.
Come stand around this table
and see all the barriers and blockades to God come down
for your neighbor, and yes, for you.