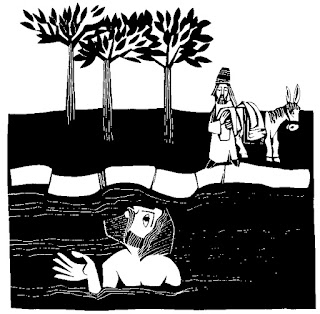 So Naaman came with his horses and chariots, and halted at the entrance of Elisha's house. Elisha sent a messenger to him, saying, "Go, wash in the Jordan seven times, and your flesh shall be restored and you shall be clean." But Naaman became angry and went away, saying, "I thought that for me he would surely come out, and stand and call on the name of the LORD his God, and would wave his hand over the spot, and cure the leprosy! Are not Abana and Pharpar, the rivers of Damascus, better than all the waters of Israel? Could I not wash in them, and be clean?" He turned and went away in a rage. But his servants approached and said to him, "Father, if the prophet had commanded you to do something difficult, would you not have done it? How much more, when all he said to you was, 'Wash, and be clean'?" So he went down and immersed himself seven times in the Jordan, according to the word of the man of God; his flesh was restored like the flesh of a young boy, and he was clean.

Naaman was a warrior, and a foreigner in the land of Israel.  Warriors are self-reliant, nation proud, know how to get things done, and never show weakness.

The warrior is one of the main male archetypes.  Even men who never go to war must learn to do hard things in order to provide for and protect their families.  It is a powerful and important part of experiencing male identity and knowing how to get things done that you must do for the larger purpose of your life.  Men find great resources, energy, and courage in themselves to live out their warrior side.

Until they can’t.  No man is always and forever strong, self-reliant, successful, and dutiful.  The warrior also knows defeat, weakness, and failure.  At some point, the warrior archetype fails as the single way a man can know himself.

Naaman needed to reach out for help.  He needed healing.  But only by going beyond his narrow tribal view of himself could he get there.  And even when he does, he is told it needed to happen a certain way.  He resists.  He wants to be in control.

The prophet Elisha was a wise man.  He knew that Naaman’s healing and transformation were not simply about a cure for his leprosy.  Naaman needed to submit, know his weakness and dependence on others, expand his view of who was connected to his life, get naked and humble, and let go and die to his old self.

Naaman resists the command to go into the Jordan river.  His servant coaxes him into humility and submission.  Naaman is healed of his leprosy, yes, but also, he is healed of his singular warrior identity.  In his acceptance of his weakness and dependency on someone else, in his realization that he cannot live his whole life only trusting in himself, in his encounter with the God who is well beyond his control and manipulation, Naaman discovers his true healing, his transformation into a whole man who can let go and trust others and God.
Labels: 2 Kings 2 Kings 5:9-14 archetypes Epiphany 6 B healing humility Naaman transformation warrior