Make Mine a Double 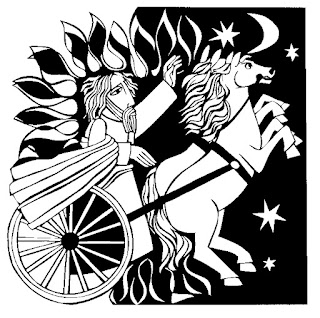 Now when the LORD was about to take Elijah up to heaven by a whirlwind, Elijah and Elisha were on their way from Gilgal. Elijah said to Elisha, "Stay here; for the LORD has sent me as far as Bethel." But Elisha said, "As the LORD lives, and as you yourself live, I will not leave you." So they went down to Bethel. The company of prophets who were in Bethel came out to Elisha, and said to him, "Do you know that today the LORD will take your master away from you?" And he said, "Yes, I know; keep silent."


Elisha knows that his mentor, guide, master, and father-figure isn’t going to be around forever.  In fact, his time has come.  Elijah, such a central figure in the imagination of Israel’s faith, doesn’t merely die.  He is taken up into heaven to be with God.  His prophetic ministry, his meaning and purpose, endure and are divinely authorized.

But who will embody them when Elijah the man is gone?  Elisha is the top candidate, the favorite son, the one to receive the blessing.  Elisha is unsure about his ability to take up the mantle, carry on the tough call to speak for God in the middle of injustice and political power games always bending the world towards greater wealth for some and suffering for many.

Fathers pass on spirit to sons.  Mothers to daughters.  Mentors to disciples.  Initiators to initiates.  Professors to students.  It is inevitable and it haunts these relationships throughout: the older must die or move on, and the younger must pick up the mantle, do the things the father, mother, teacher did, and even do them more and better.  The spirit, the authority, the empowerment, must be passed on, and must be taken up with courage.

Elisha sees Elijah mysteriously taken up into the sky, into the infinite beyond.  But he can’t keep staring up there – the chariot of fire gets in the way.   The story doesn’t say Elijah is taken away on a chariot of fire.  It says the chariot of fire gets in between him and Elisha.  You can’t keep staring up waiting for the one who taught you and loved you and encouraged you to come back and make it all better.  It’s like Elijah is somewhere beyond the sun, but if Elisha keeps staring at the sun, the fiery chariot in the sky, to see or wait for what’s beyond, he’ll just go blind.  He has to start living and trusting the spirit in himself.

Elisha tears his clothes and grieves the loss of his spiritual father.  He has to grieve and he has to face the fear of picking up the mantle.  And then he picks it up and as he finds himself doing the things Elijah did, he begins to trust that the same Spirit at work in his mentor is now at work in him, and maybe even doubly so.  He continues on with the blessing of the father/mentor/teacher, and he knows it.

Whose mantle have you had to pick up and carry?  How frightful was that to do at first?  Who are you preparing to carry on with the good work of God’s kingdom after you?  How can you pass on the Spirit that fills you and empowers you to do great things of love and justice and mercy?
Labels: 2 Kings 2 Kings 2:1-12 Elijah Elisha father mantle mentor son spirit transfiguration