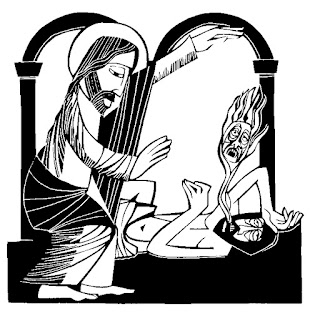 They were astounded at his teaching, for he taught them as one having authority.

That authority, it turns out, is the key word in this text
and in a lot of Mark’s Gospel.
Jesus has it.  The scribes and others don’t.
What is that about?
Why is it so amazing to everyone?
How is it good news for us?

I don’t know what your thoughts are about authority,
but for a long time it was a word that had a negative connotation for me.
Think about the ways we use the word:
“We’re going to have to report this to the authorities.”
“He’s a real authority figure.”
“Does she think she’s some kind of authority on everything, or what?”
It’s a word that often means someone who has power
or claims to anyway
and makes you realize you don’t.
After the cultural revolution of the 60’s and 70’s
the whole notion of an authority figure
meant someone like your boring, controlling father
who was always telling you what not to do.

This, it turns out, is who those scribes were.
They acted like authorities on the sacred texts.
They were biblical scholars,
devoting their lives to studying the words
and then telling everyone else what to do and what not to do.
The scribes used their power and authority
to bind people up in rules and regulations,
guilt and fear of messing up,
and living a smaller life than God intended.

The problem is, this is not authority.
This is just power and control.
This is what we might call outer authority,
but not inner authority.
It’s the kind of authority a young man thinks he has
because he wears a uniform
or is given a position of power,
and likes too much the way it makes him feel important.
It’s what leads young soldiers to do what we saw a few weeks ago:
demean and degrade the enemy by urinating on their bodies.
We give too much authority to too many who aren’t ready to handle it.
And for some reason,
Rick Perry decided to respond by saying they were only boys,
so it was somehow understandable or excusable.
Boys with authority and power can only be
outer authority, not true, inner authority.
They will diminish life in others, not give and author life in others.

They were amazed at Jesus,
astounded at his words and actions.
Finally, someone who wasn’t like the scribes,
who only had outer authority,
who used their power to control and confine others.
Jesus had inner authority,
and people had never seen it quite like this.
A calm, confident, unshakable knowing
that God was working in him and in the world for life.
Jesus authored others,
he fathered them into a new existence,
he mothered them into new life.
He set people free from the things that bound them
and possessed them and made their lives smaller.
He authors a whole new human story
by living and dying with inner authority
which even the torture and humiliation of the cross
couldn’t take away from him.

We in the church claim and know and seek out
Jesus as the one who continues to author life in us,
who fathers us into a new existence every time we encounter him,
who mothers us into new life.
He sets us free from things that bind us
and possess us and make our lives smaller.
Jesus’ authority throughout the Gospel story
is to liberate, heal, and forgive.
He does that so well and so much
that those who have only outer authority
can only feel threatened or jealous or angry.

We come here over and over again
maybe with great, immediate, urgent need
for liberation, healing, and forgiveness,
maybe with only another week in the journey going by.
But regardless, we come before the authority of God in Christ
to liberate, heal, and forgive us.
We come before God to know this inner authority Jesus’ possessed
and then, as we come to internalize the good news
by the work of the mysterious Spirit,
we start to know it for ourselves.
The authority to liberate, heal, and forgive one another,
and a world possessed by negative powers,
becomes our authority, our mission as the church.
Are we ready for this authority?
How well have we internalized the authority of God in Christ?
Are we more like young men in uniforms not yet ready
to handle authority well?

The church in Corinth knew this authority in the good news of Christ.
They were transformed and transfixed by the Gospel message
Paul had preached to them.
But something started to go the wrong way.
They weren’t quite ready handle the authority.
They were not authoring life in others.

I talked about the root of the word authority in English.
Of course, in the biblical text it’s not the English word that matters
but the Greek word behind it:  euxousia
And it turns out, this word appears also in the Corinthians reading.
But there it isn’t translated “authority.”
It is translated “liberty.”
.  9But take care that this liberty of yours does
not somehow become a stumbling block to the weak.
The folks at the church in Corinth
heard and began to internalize the liberty of life lived in grace,
the authority to live life fully and freely in God.
But they started to use their liberty with some kind of pride.
They got puffed up over their own knowledge
and sense of having risen above others.
And they started to use their liberty to harm others.
They really didn’t quite get it.
Liberty is not liberty to enslave or harm, but to set others free and heal.
Authority is not the power to diminish life,
but authorize life in others.
It’s a tricky thing to have freedom and liberty in God’s grace,
and then not use it for your own self-importance.
We tend to get puffed up on anything that gives us authority
and like the girl in Willy Wonka who puffed up like a big blueberry,
we have to get pressed and squeezed back down to size,
so the true inner authority of Christ can fill us again.

When we have rights and liberties and freedom in the grace of God
to live without someone else boxing us in by rules and regulations,
it is not always easy to live that out.
But when we do, or when someone else does it for us,
it becomes liberating and healing and graceful all over again.
In an episode of the sitcom Ellen back in the 90’s
Ellen found a puppy.
He was just sitting outside her bookstore.
No one came to pick him up.
She didn't know what to do with him.
She couldn't have pets at her apartment,
so she kept him outside the store for a while.
She gave him some water.
And then she gave him something to eat.
Now, you know what happens when you start to do that, don't you?
Did you ever have this experience:
"Oh, we’ll just go look at the puppies.
We're not actually going to get one yet."
And then you hold it , and pet it,
and play with it, and before you know it,
you're buying a leash and a bowl with a paw print on the side
and paying for shots.
That's how I got my first dog.  That's how Ellen got hers.

Since she couldn't have any pets in her apartment,
she had to sneak him in and out.
She didn't tell many people she had him.
She was still in denial over being adopted by this mutt.
It was Christmas time
So of course she bought the puppy some bones,
and a squeaky ball, and a whole mess of other dog paraphernalia.
She even put a big red Christmas bow on his head.
It was a done deal.  She was keeping this dog.

That afternoon, her father came over to exchange Christmas presents.
Ellen hid the dog in the back room,
since she hadn't told her father yet.
She and her father visit for a minute,
and then he gives her a gift.
Ellen says, "I've got something for you, too, Dad.  Just a second."
As she gets up to go over to the tree
to get the wrapped package for her dad,
the dog gets out of the back room,
runs over to Ellen's dad, and jumps into his lap.
The dad looks at him, sees the bow on his head, and says:
Oh Ellen, a dog!  Thank you!
How did you know I wanted one?
Thank you so much!
Ellen stops picking up the packages under the tree.
She turns and sees her new dog,
the one she fell in love with and bought all those toys for.
And she says, "You're welcome dad.
And here’s a bowl and some squeaky toys, too.
Merry Christmas."
The look on her face said something else,
but her father was too excited about the dog to notice.
Ellen gathered up all the dog paraphernalia,
gave it all to her father, and he left with the dog.

We are the people who gather in the life-giving power of Jesus
who authors us to be a grace-filled, loving people.
God’s  authority is to author us into existence,
and re-author us in Christ
into the new us that lives freely in God’s grace,
joyfully even, freely, liberated from whatever keeps us
from living a full, expansive human life.
Jesus is the authority for us to receive
liberty, healing, and forgiveness so we can truly live.
Jesus is our authority to love and be loved.