A Cup Full of Stars 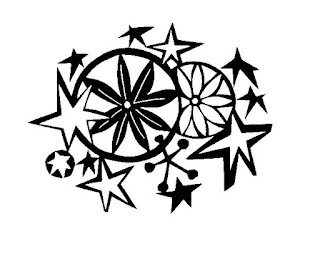 Here’s a strange thing that happened to me: This past Sunday was the Sunday of the Baptism of Our Lord, celebrating Jesus' baptism by John in the Jordan and the voice from heaven that names him the beloved son.  It's a central story of Epiphany.  In our sanctuary, we hang a large gold star over the center of the chancel, the area in front of the altar.  It’s there beginning Christmas eve, even though the star is actually an Epiphany symbol, coming later on when the magi appear.

On Sunday, I was celebrating communion, chanting the liturgy and speaking the eucharistic prayer, decked out in a white and gold chasuble.  When it came time for the words of Jesus over the bread and wine, I held up the bread as usual, saying “Take, eat, this is my body given for you.”  Then, I held up the cup.  When I lift up the bread and cup, I hold them up high so everyone can see them clearly as the focal point of the ritual, just a little higher than my own eyes so I am looking up.  As I held the cup up high this time, I looked up at it, and as I said, “This cup is the new covenant of my blood shed for you and for all people,” hanging directly over the cup in my line of site was the star, as if it had just arisen out of the cup.  It hovered there, and my depth perception blurred and I saw the cup and the star merged into one symbol.  I was seriously tempted to stop and say, "You people won't believe this... you've gotta come up here and see it!" But that would have been an extremely awkward interruption in a sacred moment!

I’m not much for mixed metaphors, but it was striking to me to have the star hanging directly over the cup in my vision.  A cup full of stars pouring out light.  An epiphany, a theophany, a manifestation, flowing out from a courageous cup of sacrificial love. Pouring out your life for the world is the light that shows the way.  Drink up the light of Christ and let it shoot out of your eyes and ears and fingertips and mouth and brighten some dark corner of this world.

Sometimes we see more than we hear or can express. Sometimes poetry happens without words.   Sometimes a cup full of stars makes perfect holy sense.