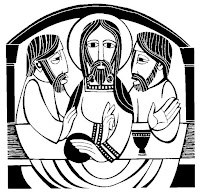 
Do you want to see him?
It’s all over these resurrection stories.
People heard Jesus was raised,
and they want to see him.
Maybe it’s because this miss him
and want to return to the friendship they had.
Maybe it’s because they can hardly believe the news,
and need to see him for themselves.
But whatever the reason,
there’s something about the resurrection of Jesus
that means seeing Jesus in new and surprising ways.

What about us?
I mean, it may sound hokey,
but what if we could actually see the risen Jesus?
What would your faith and life mean
if you had that kind of experience?
Would you become some crazy street preacher?
Would you become a contemplative soul?
Would have exactly the same life you live right now
but with a deep, inner knowing?
The apostle Paul saw the risen Christ
a couple of years after the day of resurrection,
and it transformed his whole life.
Mystics have had experiences of seeing Christ
and write about the profound sense of warm light and love.
But us? Seeing?
Having an experience of the risen Jesus
in this day and age?
Isn’t that kinda weird talk,
and not Austin weird, just really weird.
Maybe, but maybe any talk about an executed man
who was raised from death is weird to begin with,
so why not?

We know there are a lot of weird sightings of Jesus today.
Jesus on burnt toast.
Jesus on a tortilla.
One of my favorite Jesus sightings is told
in a transcript from a CNN story many years back.
A photograph was shown of a bunch of stars.
It was taken by the Hubble Space Telescope.
Some people thought they saw something in the picture,
so the next day, the phone lines were opened
and the following conversation occured
with anchors Lou Waters and Bobbie Battista,
as reported in Harper's magazine (April, 1996, p. 23):

Lou Waters Pictures taken by the Hubble Space Telescope have created a phenomenon of sorts, with folks calling, saying that they see something in these pictures that perhaps many others do not see. We have someone on the line from Texas. Texas, are you seeing something there?

Caller Yes, I do. I noticed it last night. I saw it on CNN as I was about to go to bed, and I thought, "That appears to be Jesus Christ, but I will wait till tomorrow and see if anyone else sees what I see." To me, it just looks like him.

Waters We've been getting a lot of calls from people who agree with you. Why do you see that?

Caller I don't know. It just appears to be a picture of Jesus Christ. Let me say, first of all, that I do not go to church regularly. I try to live a plain, good life. I'm not a religious fanatic who, you know, sees Jesus Christ in everything I look at.

Caller. But when I walked by the TV and looked at that, I thought, "My God, they say this is the birthplace of stars and things, and that appears to be Jesus Christ."

Bobbie Battista Okay. Thanks for calling. Let's check to see if anybody else agrees with you. To Nevada--you're on the air.

Caller Hi, I just saw a cow in the picture, just below where the lady said she saw Jesus Christ. Plus, there's a cat, and there's a dog barking up a tree, like he's treeing a coon.

Waters Okay, Nevada, thanks a lot. Florida is on the line.
Florida, what are you seeing?

Caller I see a portrayal of what looks like Jesus Christ--the big hair, the skin, the mustache, the nose, the eyes. Like the lady from Texas, I don't attend a denominational church, but I believe in the Word and I clearly see that face.

Waters Okay, thanks a lot.

Waters It's really remarkable that so many people called independent of one another.

Battista I see what they're talking about. I mean, I can see it, too, if you look at it long enough.

Battista What do you see?

Caller I see the Statue of Liberty.

Battista That's a new one.

Waters All right, what do we got here? Toronto? Okay, Toronto, go ahead.

Caller Well, to me it looks a bit like Gene Shalit.

OK, maybe seeing Jesus is kinda strange,
thought not as strange as Gene Shalit…
Here’s the really strange thing in our story:
Their eyes were kept from recognizing him.
The story begins with two disciples, Cleopas,
and an unnamed disciple,
who was likely a woman disciple since she wasn’t named.
They are walking along with, yep, the risen Jesus
but their eyes were kept from recognizing him.
Funny… in a resurrection story about seeing Jesus
it begins with being prevented from seeing Jesus.
They walk along with Jesus,
but they don’t recognize him.
They talk about what had happened to Jesus with Jesus,
and Jesus plays with them a bit by pointing out
how everything they had experienced in him,
his rejection, suffering, death, and resurrection,
fulfilled God’s intentions in Scripture.
Then they get to the place where they were going,
and it’s time for supper,
and the crucial moment comes,
as the stranger is about to walk along into the night.
This is their testing.
This is the reason their eyes were kept from recognizing him.
Would they invite him in for supper,
this stranger in their lives,
or would they let him go on his own way.
The stranger Jesus starts to walk on,
and they stop and invite him him.
They share their bread with him,
this stranger who seems more strange than ever.
He breaks the bread with them,
and their eyes are opened. They recognize him.
Jesus is risen. They saw him. And he’s gone.

They didn’t see him in toast or tortillas.
They didn’t see him in the stars.
They didn’t see him because they expected to see him.
They saw Jesus because they broke bread with the stranger.
The resurrection of Jesus,
the very living presence of Jesus,
is known and seen and experienced
when the stranger is invited in to share a meal.
It isn’t so much that they saw him with their eyes.
The text says: They recognized him.
They re-cognitioned him.
They knew him again and their living Lord and companion.
I imagine that after that encounter,
those two disciples would never dare let a stranger
walk off alone in the night
without offering hospitality and breaking bread,
and knowing Jesus again and again.

I said that their moment of pausing and inviting the stranger in
for hospitality, for supper,
was their moment of testing.
It wasn’t a testing like a pass/fail exam.
It was their testing so they could know,
so they could re-know Jesus,
so they could know how to re-know Jesus again and again.
Would they do just what Jesus did:
share meals with everyone,
break bread with everyone,
stranger and friend,
rich and poor,
socially acceptable and ostracized?
They do, and they know Jesus as risen, powerful presence
in doing the Jesus thing.

Jesus disappeared immediately after they recognized him
in the breaking of the bread.
Then they went back to Jerusalem to tell their friends
and Jesus appears again.
And this time, they eat fish together.
Bread, fish. Jesus sharing food with all.
Sharing a meal is how resurrection is understood.
Sharing food in community and with strangers
is how we know and re-know Jesus
as our risen Lord and friend.

This text is a clue, a hint, an invitation
to find the presence of the living Jesus
in the breaking of bread, sharing of food with strangers,
not because they are hungry or in great need,
though certainly that, too.
But because when strangers break bread together,
they are no longer strangers,
they are companions.
Companions are those who break bread together, literally.
Jesus is known as our companion
when we break bread in his name in our sacramental meal.
Maybe instead of Holy Communion, we could call it Holy Companion.
But don’t miss it:
Beyond the sacramental meal,
Jesus is known as risen, living, empowering presence
in all our normal meals,
in all the ways we are brought together in companionship,
and specifically in this story today,
in the ways we show hospitality to strangers,
break bread together,
and become strangers no longer.

Do you want to see the resurrected Jesus?
Do you want to know him again?
Don’t look for toast or tortillas or stars
or expect to figure it all out, or have a glowing light appear.
Let the story guide you and reveal the mystery to you.
Learn how to recognize him
as we share this meal together.
And go out and find him in the gift of companionship
and hospitality
and the stranger you wouldn’t dare let walk off alone in the night.
Labels: bread communion Emmaus hospitality Luke sermon stranger